DEFENDING: A dignified life, free from violence, for all LGBTQIA people

We must stand up for each other no matter what, in any kind of situation where we see injustice, exactly because we know what it’s like to survive those things." 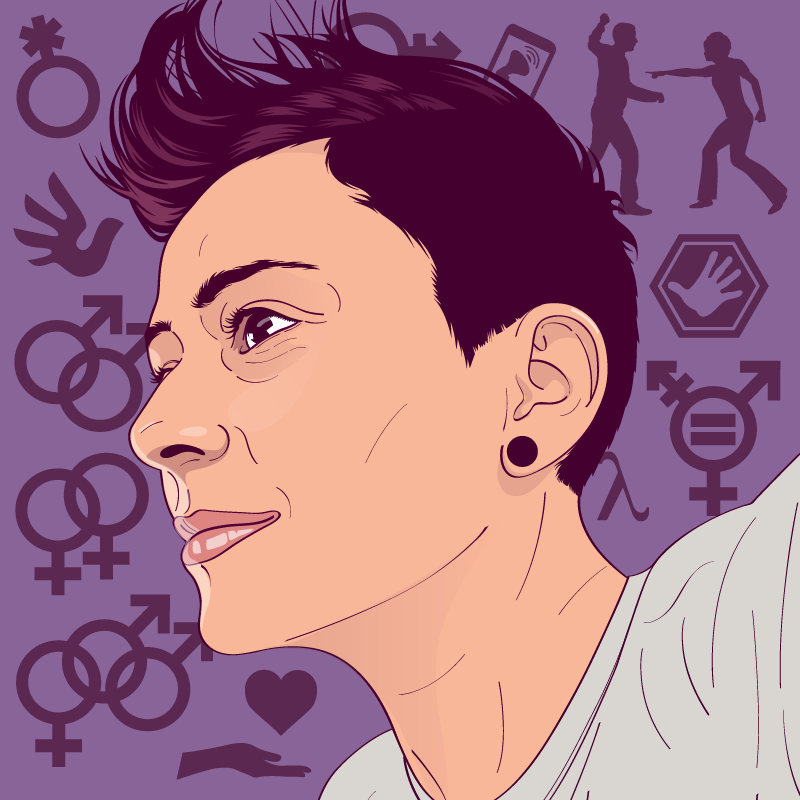 Show Azra and women human rights defenders around the world that you stand with them! Sign our #DearDefendHer solidarity statement today.

As an activist, trans, and queer person, Azra has experienced discrimination, hate speech, and violence. Her identity as an activist is rooted in a deep sense of justice and responsibility. “I really believe that as someone who has survived and lived through injustice it’s my duty to react and to do right against the injustice,” says Azra. “I am fighting for the right to a dignified life, free of violence. A life where connections are made based on compassion, solidarity, and creativity. These are values that we need to reaffirm constantly when you live in an oppressive context with norms that divide people.”

Azra co-founded LGBTQIA Association Okvir in Bosnia in 2011. The organization is the only women-led LGBTQ organization in the country; they create public awareness campaigns and events about gender and sexuality issues and build community through counseling, safety training, and a safe space to gather. In a country where LGBTQ people are often discriminated against, services like the ones Okvir offers are rare, and safe spaces where the community meets serve as a critical lifeline for those who are marginalized.

Bosnia is home to a community of strong and outspoken activists. Even so, fighting for the rights of the LGBTQ community is especially risky. The country is deeply rooted in traditional patriarchal culture, with a strong conservative Catholic, Orthodox, and Muslim political agendas that fiercely oppose LGBTQ rights. Prejudice is common, and LGBTQ people experience discrimination in many essential areas of public life, including at school and in health systems where people aren’t trained in working with the LGBTQ community to respect their rights or respond to their specific needs. Complicated territorial divisions mean that the minimal legal protections that do exist are applied inconsistently—for example, not all areas have laws against hate speech or hate crimes.

This means that for Azra and her fellow activists, public gatherings or demonstrations are nearly always met with threats. Police in Bosnia classify any public event hosted by an association like Okvir as “high-risk.” When a partner organization announced plans for the Sarajevo Queer festival, protestors uploaded videos to YouTube that included hate speech against gays and threats to behead the organizers. A public press conference Okvir and another organization hosted for “Coming Out Day” was interrupted by several men who protested and made threats against Azra and other organizers. Azra and activists like her are always aware of the possibility of violence.

“Violence against LGBTQ people is on multiple levels, from not being able to walk down the street holding hands, to going to a doctor or gynecologist and – when you say you’re lesbian – finding that they would kick you out, to peer pressure and peer violence,” Azra explains. “If you don’t fit in gender norms, you are immediately a target.”

But even though threats to her safety are everywhere, Azra isn’t afraid. “Those experiences make us more aware,” she says. “Now we think more of security, more of safety, and how to use strategies and resources and to coordinate across the community. The good news about it is that you learn really a lot about yourself. I learned not to ignore the fear. I learned how to see it, recognize it, react sometimes instinctively in order to protect myself, and sometimes transform it, to make something out of it.”

72%
of the LGBTQ population in Bosnia has experienced psychological abuse due to their sexual orientation.
Global Fund for Women supports groups that fight for the sexual health and rights of women, girls, and trans people around the world.

STAND IN SOLIDARITY WITH THE DEFENDHERS

I stand with you and all women human rights defenders around the world working to advance human rights for us all in the face of escalating risks, threats, and harassment.

I’m adding my name to ensure that you and other women defenders know that the international community is with you every step of the way. I stand in solidarity with you and applaud your resilience, bravery, and devotion to securing human rights for all. I commit to add my voice, take action, and drive international pressure to support your courageous work.