Global Fund for Women stands in solidarity with women in Nicaragua who are demanding an end to government repression and violence toward protesters and a peaceful and democratic solution to the current political crisis.

In mid-April several protesters were killed in clashes with pro-government groups, and security forces and many more were injured while protesting social security reforms. Since April, more and more Nicaraguans have taken to the streets to protest the negligence and repression of the government and to call for President Daniel Ortega to step down and end his 11-year presidency. Nicaraguans are calling for the government to take responsibility for the deaths, end the violent repression, and facilitate a democratic transition of power with Daniel Ortega leaving office.

The government has responded to the protests with repression and inaction. The death toll continues to climb with more than 200 deaths reported to date, most of them carried out by pro-government groups and security forces. The Inter-American Commission on Human Rights (IACHR) reported that as of June 19, 1,337 people had been injured in the protests, at least 507 people detained and that hundreds of people have been harassed and threatened, particularly human rights defenders. Human rights violations documented in Nicaragua include illegal detentions, torture, censorship and attacks on the press, intimidation and harassment of human rights defenders, and failure to provide emergency medical care to injured people—all aimed to dissolve and discourage protest and dissent. The IACHR also found that there was a climate of intimidation and threats toward groups critical of the government, including human rights defenders, journalists, students, and demonstrators, and that many members of these groups have been directly threatened or surveilled by state agents and para-police.

According to activists in Nicaragua, as the violence spreads, women human rights defenders who were already at risk of attack have seen an increase in threats, criminalization, smear campaigns, and violence against their organizations and activists. Women’s groups have reported receiving threats and intimidation online and in person.

One women’s human rights activist in Nicaragua whom Global Fund for Women is in contact with report that she has received death threats in her home and that parapolice have opened fire on her house. Her home is under constant surveillance by parapolice and by people associated with Ortega’s political party. The activist, who will remain anonymous due to safety concerns, told Global Fund for Women via email that the threats have been so severe that she has had to flee her home along with her family. Other activists have received threats to burn down their houses and have had their sexual orientation mocked in smear campaigns on a pro-government radio show that suggested that they activists need “a good thrashing.”

One women human rights defender (who asked to remain anonymous to protect herself and her organization from retaliation) said:

“We, both myself and the staff at the organization, have received threats, intimidation, and blackmail on my Facebook page. In front of the office where we work is the house of a congressman who monitors our office all day, when we come in and when we leave. On various occasions, he has appeared the doorway cleaning his gun as an intimidation tactic.”

These are only a few examples of the many threats we have learned about from women’s rights groups who have been targeted in the midst of Nicaragua’s political crisis. We strongly urge the government and international community to protect and stand up for women’s rights and lives during this critical time.

Global Fund for Women joins the international chorus of organizations and individuals condemning the violence and repression and calling for a peaceful resolution to the political crisis in Nicaragua. We urge the international community to stand in solidarity with women in Nicaragua and to call on the Nicaraguan government to protect the lives, rights, and freedoms of its citizens and ensure the safety of women human rights defenders now and always. 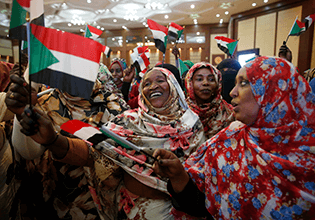 News
The Women’s Revolution in Sudan: We stand in solidar...

Military forces have violently cracked down on civilian protesters – many of them women – fighting for their rights in Sudan over the past year. 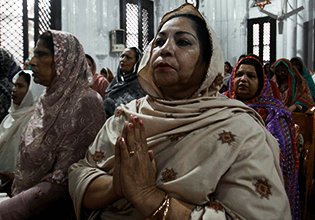 News
We Stand in Solidarity with Sri Lanka

We stand in solidarity with Sri Lankans in grief and shock after the terror attacks and stand behind the activists resisting backlash and violence.