As we reflect on 2018, we are reminded of the many powerful ways that women’s movements are shaping policies, practices, and conversations—relentlessly pursuing crucial efforts to preserve or advance human rights for all, despite tremendous opposition.

Here are just a few of Global Fund for Women’s highlights for rights, justice and equality from the past year—including legal wins, strategic breakthroughs, and moments of resilience and strength. Looking back on all that was accomplished reminds us of the incredible power, resolve, and boldness of women around the globe, and inspires us to bring that same spirit forward into 2019. 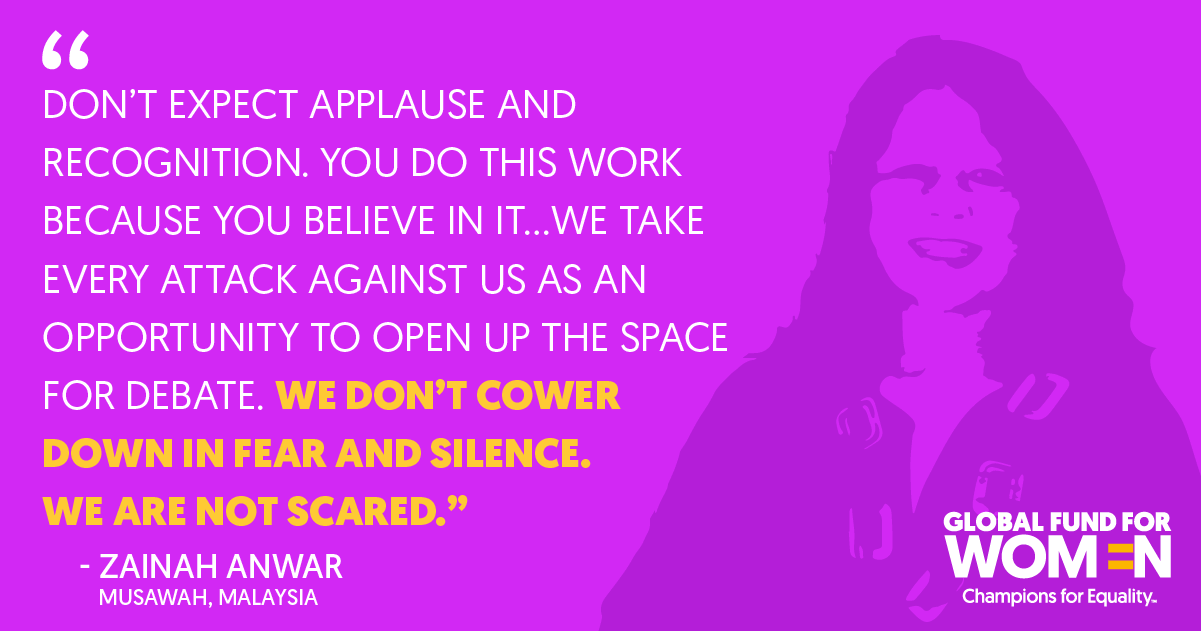 “Don’t expect applause and recognition. You do this work because you believe in it…we take every attack against us as an opportunity to open up the space for debate. We don’t cower down in fear and silence. We are not scared.”

In Egypt, the government continued their crackdown on activists, including escalating pressure against Mozn Hasan, Global Fund for Women board member and founder of the Egyptian women’s human rights organization Nazra. In a brazen attack in Brazil, Marielle Franco—a well-known Afro-Brazilian politician and LBTQI activist—was murdered in March at just 38 years old. And in Ukraine, prominent activist Katerina Gandzyuk was murdered, and far-right extremists are suspected. But despite the ramping up of attacks against women rights defenders in 2018, they not only intensified their work, but also found collective spaces for celebrating successes,  reflection, and action.

“It seems to me that, in the story of this battle, we have arrived. All the young women who wear green handkerchiefs, out here in crowds, flooding our streets—I think they tell that story. There is no turning back.”

While efforts to restrict and roll-back abortion rights in the U.S. and across the globe continued, we also saw tremendous progress. Women’s movements made incredible gains in Chile and Ireland, where abortion—previously banned completely in both countries—was decriminalized. And in Argentina, after decades of activism, women’s groups galvanized public and political support and helped bring an abortion rights law closer to passing than ever before. The bill, which would allow for legal abortion in the first 14 weeks of pregnancy, passed a vote in Argentina’s house, but was rejected by the Senate. While the bill was ultimately not successful this year, women’s groups were galvanized by the unprecedented public support and are more hopeful than ever that reproductive justice for Argentina’s women draws near.

3. Shifting the frame on climate change

When it comes to making decisions about how to combat climate change, women—especially rural women—are typically left out. Yet it is women who bear the brunt of the extreme weather that is a result of climate change. More women are displaced by weather events like hurricanes or floods, and women produce up to 80% of the world’s food—crops that suffer in drought, floods, or extreme temperatures. This year we were inspired by women’s groups who are addressing climate change in ways that are grounded in the needs and realities of their communities. This includes grantee partner Women’s Collective in India, which promotes women’s leadership in on climate issues and works with women farmers to ensure food security, and Women and Rural Development Network in Northern Uganda, which introduces sustainable agriculture practices (including rain water harvest and greenhouse farming).

We also saw world leaders bringing this disparity to the forefront—such as former President of Ireland Mary Robinson, whose book Women’s Role in Climate Justice was published this year, and who sat down with Global Fund for Women CEO and President Musimbi Kanyoro in September to discuss how grassroots women are responding to, and leading, climate change efforts.

4. Recognizing the power and leadership of girls and young women.

“I want to see myself in the future as a young woman who has a voice in the society, who has the power to question authority or institutions without being afraid. I know that the feminist leadership skills that we are going to obtain here, it will make it happen.”

Young women and girls are experts of their lived realities and are mobilizing to advance positive change in new and exciting ways.  We know that advancing women’s rights entails work across multiple generations and activists are advancing models that build on the work of our foremothers while also giving space to youth leaders to define and advance their priorities.  The importance of cross-generational and cross-movement exchanges is backed up by research and learning efforts—including by partner organizations MamaCash and FRIDA – who recently released a joint report called Girls to the Front: A Snapshot of Girl-led Organizing, highlighting the powerful work that girl-led movements are already doing, and identifying how they can best be supported.

At Global Fund for Women, we ramped up our support for young women and girls by launching, together with others, an Adolescent Girls Fund, a multi-year initiative to help strengthen girl-led movements and deepen our partnerships with them. This year, we also expanded a Young Women’s Leadership Initiative (launched in Southeast Asia in 2017) to East Africa. In November, girls and mentors from Kenya and Tanzania met in Kenya to kick off the project and connect a new cohort of young women leaders working for change directly in their communities.

5. Holding perpetrators accountable for violence against women and girls

This year, we witnessed how women human rights activists from across the globe are mobilizing against the murder of women because of their gender, also known as femicides. In May, after endless campaigning from Global Fund for Women grantee partner Cooperativa de Trabajo Mujer Ahora and other feminist groups, Uruguay saw the first conviction for femicide since it officially became a crime in October 2017. Our Palestinian partners at Women’s Centre for Legal Aid and Counseling and other feminist groups are mobilizing to break the silence and impunity for the murder of women. In Israel, Palestinian and Jewish women organized a strike in December to voice their outrage after the murder of 16 year-old Yara Ayoub and 13 year-old Silvana Tsegai. Ni Una Menos, a feminist movement that started in Argentina as a collective cry against machista violence, has spread throughout the continent and beyond. Under our Freedom from Violence issue area, Global Fund for Women is committed to continuing to support these courageous groups who are fighting impunity for perpetrators of violence against women and girls.

6. Bringing feminist philanthropy to the mainstage

Large funders—including the Government of Canada, which implemented their feminist philanthropy project in 2017 and this year announced plans to commit more than $300 million to fund gender equality globally—are coming together inspired by a feminist approach to philanthropy. And we saw that there is a huge public appetite to learn more about what difference feminist philanthropy and women’s funds make when President and CEO Musimbi Kanyoro delivered her TED Talk for International Women’s Day in 2018, calling on listeners to “Embrace Isirika,” the Maragoli concept of equal generosity, mutual responsibility, and community organizing to find solutions to help everyone—a truly feminist concept.

In October, the winners of the Nobel Peace Prize were announced—and it turned out to be a win for survivors of sexual violence, too. The winners were Dr. Denis Mukwege, who worked extensively in the DRC, and Nadia Murad, a survivor leading the charge against sexual violence by the Islamic State. The win brought the issue of sexual violence as a weapon of war to the fore, and validated the work of many women’s organizations in the DRC and beyond who have been working with sexual violence survivors and lobbying for political change for years.

8. Intersectionality in the spotlight

As women’s movements strategize about how to make the most powerful impact in the face of increasing oppression, more and more organizations, leaders, and movements are recognizing the power of cross-movement organizing. The result? More collaboration, conversation, and connections between social justice organizations, leading to stronger movements. In May, Global Fund for Women hosted a panel discussion with American Jewish World Service and Sister Song Women of Color Reproductive Justice Collective to explore opportunities to connect movements, how funders can support growing movements, and more.

But despite risks, women’s organizations are finding creative ways to meet, work together, and strategize. Together with partners, Global Fund for Women hosted 12 convenings in 2018, where activists, researchers and grantees came together to share learnings, strategies, and experiences.  As explored in Urgent Action Fund’s report on shrinking civil society and a new report by Funders’ Initiative for Civil Society, groups are using social media and other technology to connect, creating new funding channels to bypass legal restraints in oppressive countries, using “artivism” to challenge repression, and sharpening their focus on digital and physical security to ensure the health of their movements.

This year the Trump administration continued its repressive policies that affect women and laws globally, including the Global Gag Rule, the ban on domestic violence survivors seeking asylum, and appointing conservative and women-hostile Supreme Court Justice Brett Kavanaugh. At every turn, women reacted powerfully—by mobilizing, protesting, and running for office. As a result more women and women of color – who often connected global and local issues in their campaigns— than ever will be sworn in in January as U.S. representatives, deepening the bench of advocates for women’s issues in the U.S. and beyond.

HELP AMPLIFY THE VOICES WHO CHANGE OUR WORLD

Global Fund for Women supports women-led groups who are demanding rights in their own communities. For Women’s History Month, use your voice to support courageous activists shaping our future.