DEFENDING: Women’s rights to land ownership and an end to sexual abuse by security forces

If you take away land from women in the rural areas, you take away their livelihoods; Then we fight. Because we have nothing else to lose. 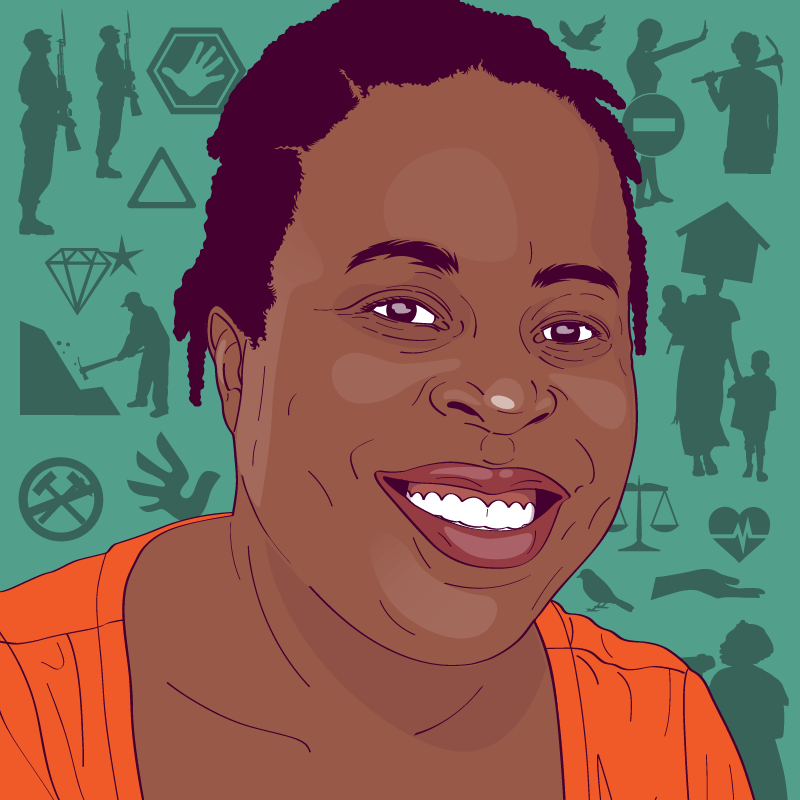 Show Melania and women human rights defenders around the world that you stand with them! Sign our #DearDefendHer solidarity statement today.

“I was born across the road from the diamond fields.”

Melania Chiponda has personally experienced what mining does to African women’s lives. She remembers a time when people came to the Marange area in Zimbabwe to buy cattle or to pick fruit from the majestic baobab trees.

Today, the mines have displaced both the people and the trees. Families have been forcibly relocated, and cut off from the land that sustained their lives and livelihoods. Women and children have been left homeless because the government only counts a “family” as a male-headed household, and some men have many wives. In one case Melania supported, the man had 14 wives and 76 children. He was given a four-room house, leaving many wives and children homeless and forced to sleep outside in the rain.

Melania was moved to devote her life to women’s rights one day when police stopped the bus she was riding to Marange and demanded that the women strip naked for body searches. She responded to this violation with outrage, asserting her rights and demanding to see a warrant. She hasn’t stopped since then, despite frequent arbitrary arrests and intimidation. She’s been working as an activist since 2009, and just this year began working with WoMin African Gender Extractives Alliance.

With the expansion of mining and oil extraction, military and police forces have moved in to back up the companies. They use violence and sexual violence to intimidate local women and girls and repress resistance. In some cases, soldiers or police gang-rape women as a form of punishment—for artisanal mining, for “trespassing” on diamond fields that were once their ancestral lands, or for demanding greater compensation for their land and labor. Since Melania began her work, state security agents working with the industry have broken into her car, stolen her laptop, and arrested and detained Melania multiple times—sometimes holding her for days before releasing her.

The mining and oil industries and armed government security forces together intimidate and harass African women who are defending their land rights. Women often cannot access land and compensation due to a patriarchal system institutionalized in laws and practices that discriminate against them. Frequently, women on the front line of grassroots organizing are thrown in jail for defending their rights and the rights of their communities. Land grabbing and the military occupation of mineral zones has left many women living in mineral and oil-rich areas of Africa exposed to structural violence. “If you take away land from women in the rural areas, you take away their livelihoods; you take away the very thing that they identify with,” says Melania. “Then we fight. Because we have nothing else to lose.”

Against the odds, Melania and her organization have brought women together and won some battles. They ended body searches in the area and opened up discussion of the forms of state violence used against the people. After occupying a government building, they halted relocation from lands for mining until the government can provide decent housing. Melania’s organization helps women who have survived violence get legal representation, medical care, and counseling, and advocates for the rights of grassroots women in crisis situations.

Melania notes that the extractive industry is forcibly breaking the vital tie between native women and the land. Mining and other extractive industries are trampling on their rights, destroying their communities, and stripping women of their identity and their ability to support themselves and their children. Melania sums up her work in these words: “Sometimes I think it’s dignity that I’m fighting for—that women are supposed to be treated with dignity, with respect. And when I look at a lot of the women I interact with, to them, land is their dignity.”

12%
In Zimbabwe, of all registered individual landowners, only 12% are women.
Global Fund for Women supports groups working for economic justice for women and girls.

STAND IN SOLIDARITY WITH THE DEFENDHERS

I stand with you and all women human rights defenders around the world working to advance human rights for us all in the face of escalating risks, threats, and harassment.

I’m adding my name to ensure that you and other women defenders know that the international community is with you every step of the way. I stand in solidarity with you and applaud your resilience, bravery, and devotion to securing human rights for all. I commit to add my voice, take action, and drive international pressure to support your courageous work.