DEFENDING: Respect and security for indigenous culture, access to land and resources, and women’s rights 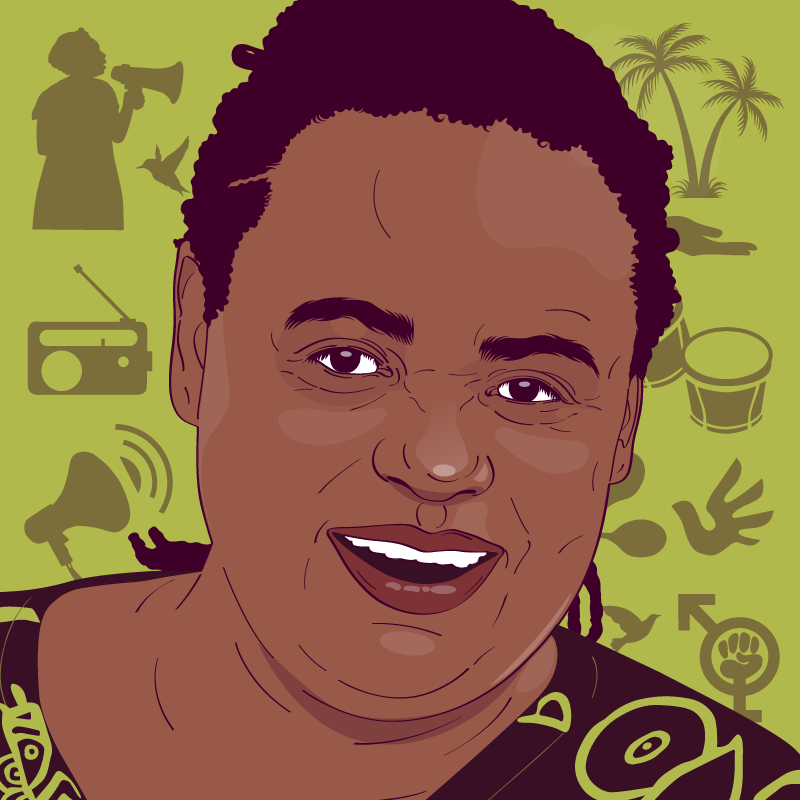 Show Miriam and women human rights defenders around the world that you stand with them! Sign our #DearDefendHer solidarity statement today.

For decades, Miriam Miranda has worked to reclaim community and defend the land and cultural rights of the indigenous Garifuna people of the Atlantic Coast of Honduras. Working in a country with one of the most violent and repressive governments toward activists, Miriam has become a target of death threats, imprisonment, and attacks. It’s also taken her around the world, building ties between movements and people.

Miriam was born in the Garifuna coastal village of Santa Fe, but grew up in the Honduran banana plantations where her family migrated in search of work. As a university student in the capital city of Tegucigalpa, she went out into the city’s slums to promote women’s rights. There she witnessed shortages of basic needs such as food and water, and extreme violence against women.

“That’s where my feminist consciousness was born,” Miriam explains. “When I got to the capital and started visiting the women in the barrios and saw how they had to spend hours just to get water, I knew something wasn’t right. It changed my way of seeing things.”

After moving back to Garifuna territory on the Atlantic Coast, Miriam became a leader of the Black Fraternal Organization of Honduras (OFRANEH). The organization defends indigenous land rights and natural resources.

It’s not an easy task. The encroachment of oil palm, drug trafficking, mining, hydroelectric projects, and large-scale tourist development has intensified since the 2009 coup d’état. The Honduran government has militarized much of Garifuna territory, bringing violence and siding with large companies to wrench control of ancestral lands and resources.

Miriam believes the key to resistance is integrating the defense of land and culture. Ancestral drums and dances accompany Garifuna events. The organization teaches its culture and language in the communities and relies on traditional spirituality for strength and protection.

There’s a high personal price to pay for being an outspoken defender in Honduras. Miriam has been thrown in jail, beaten, and kidnapped. She can’t move about freely like other people, due to security risks. That means she can’t go out dancing with her sisters—a major sacrifice for a woman who loves to dance and who lives by the belief that “the struggle, like life itself, should be joyful.”

The scariest moment in her life, Miriam recalls, was the day an organized crime commando kidnapped her and 17 other OFRANEH members in a remote village called Vallecito. The group was miraculously released. “The only reason we weren’t killed, we say, is that our ancestors didn’t allow it.”

But the biggest blow was the March 2016 assassination of Berta Cáceres, an indigenous Honduran human rights defender known throughout the world. When armed gunmen shot Berta in her own home, Miriam lost a dear friend and her closest ally in defense of land and rights. She also lost peace of mind. Berta’s murder created a climate of increased risk for defenders throughout the country. Miriam explains, “If they could go after a woman like Berta Cáceres–an internationalist, a woman who won a major prize, the Goldman Prize–they can do anything, they can strike anyone, because there’s no respect for any human rights defender in this country.”

OFRANEH has won battles that have inspired indigenous peoples everywhere. In December of 2015 the Interamerican Court of Human Rights handed down two judgments in favor of Garifuna communities, finding that the Honduran government had violated collective ownership rights, and failed to provide judicial protection and adequate consultation. “It’s not only a victory for the Garifuna people,” Miriam states. “I think it is a significant contribution of the Garifuna people and OFRANEH to the rights of indigenous peoples throughout the world.”

For Miriam, it’s the youth–her own children and young people everywhere–who inspire her to move forward “so that future generations will have the resources and assets they need to survive on a planet that’s being destroyed every day.”

#1
Honduras is #1 in the world for the killing of environmental defenders per capita.
Global Fund for Women supports groups working for the safety and security of women human rights defenders.