Where are all the Muslim women in music and pop culture? Singer and artist Rajae el Mouhandiz is leading the movement for Muslim women’s representation in pop culture with her message of positivity, hope, and inclusion. Rajae shares her music video and talks about what challenges she faces as a Muslim woman artist, from both mainstream and Muslim media and music labels. She shares that while she feels the walls are being built higher and higher to keep her and other Muslim women musicians out, she is breaking the walls down every day. Prepare to be inspired by the music and words of this bold, creative, courageous trailblazer.

“I have faced tremendous resistance and struggles. In the country where I live, the Netherlands, I have had to deal with being underestimated by the Muslim Dutch community, and have faced racism and Islamophobia. I am still breaking walls every day. Not just in society, in the artistic scene, but also in the media. These days anti-Islam messages are given huge platforms, where people like me who bring a positive, “inclusive” message are denied access to mainstream media. It feels like the walls are being built higher and higher—but there is a shift happening as well. My peers and supporters have become savvy in the use of online and international platforms. A new generation of talents and art lovers has risen and they are eager, hungry, and positive!

I have had to deal with Muslim music labels not wanting to promote me because I am a women and didn’t wear hijab. They thought I was too “sexy”—ha! But they would ask me to write songs for their male artists. (What’s interesting is that male Muslim pop artists are given plenty of space, budget, and the platforms to build and travel the world. For example, Yasiin Bey (Mos Def), Lupe Fiasco, Sami Yusuf, Yusuf Islam, Outlandish, and others.) It’s time for female Muslim pop artists to receive the same respect and support.

In the Islamic world popular music has always been seen as “not halal,” “de-moralising,” etc. Instead, the focus has been on science, religion, debate and culture. Great and understandable, but we also live in a media driven world. We can forbid the creation of entertainment, or we can also create a beautiful, Islamic-inspired space where creativity is welcome.

I believe that pop culture and songwriting in Muslim culture—just like in all other cultures—are great vehicles to use as a way to express yourself, your search for your unique character and identity, and to share ideas with your peers and the world. Pop culture has always be a catalyst, and has proven to be very effective tool for cultural diplomacy or cultural rebellion. Muslim youth are just like any other youth—they are young and in search of themselves, and they are a huge audience! They just have not been given the same platforms yet, especially not in the West and on mainstream international channels.

Where are the young Muslim artists, the Muslim brand ambassadors for huge companies, the Muslim Hollywood stars, fashion gurus, or media personalities? Are we only welcome to be consumers, spending money on content that hardly ever relates to our stories and values? Or can we also be part of the media mecca that inspires and influences the mainstream? We live in a media-based world. We can’t miss the opportunity to share our culture using the tools of these times.

But there is a cultural renaissance going on, and it’s starting online: on blogs, on YouTube, on talent shows, on the catwalk, on comedy platforms, on poetry and slam poetry platforms, in indie film projects. It’s time the mainstream record labels, media outlets, and ad companies start “getting” it and allow more Muslim artists to build audiences and tell authentic stories. I have waited for 18 years for this to happen. (Check my short doc film HOPE! where I reflect on this.)

Western labels said I was a dreamer, that my market does not exist. Some asked me to let go of my faith. It never stopped me from experimenting and looking for creative ways to continue. Now, here I am almost three albums later, and the Muslim community is calling me a leader.” 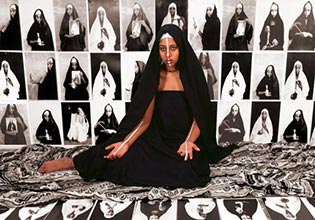