Women’s rights means that when a woman arrives at a job, she can occupy the same space as a man or a white woman, because she is just as capable as the white woman or the man.

Nilce is a leader of a terreiro, a community of black women who practice Afro-Brazilian religion and traditions. In 2005, she got involved with Global Fund for Women grantee partner CRIOLA, a women’s rights organization led by black women who work with other Afro-Brazilian women and girls in the poorest areas of Rio de Janeiro to empower them to combat racism, sexism, and homophobia, and improve living standards for the Afro-Brazilian community.

There is a strong racial divide in Brazil, and black people often make far less money, have less access to resources and education, and face discrimination on a daily basis. “People still have that stereotype that being black means we can only be domestic workers or street workers. People don’t believe that black people can be lawyers or teachers,” says Nilce. “I have a daughter who is a sociologist but people don’t believe her. About any professional–a lawyer, or a doctor–they say ‘Imagine, a doctor? That black girl?’”

Terreiros like the one Nilce leads are an important resource for many Afro-Brazilians, offering help for anything from health issues to job training to simple social support. “In our community, many women seek out the terreiro,” says Nilce, who serves as a mother figure for many in her community. “They come for many reasons, and we try to welcome, orient, and guide them as much as possible… I talk to people. We talk about our lives. It’s very important to talk about what you’ve been through, the stories that you know. ” 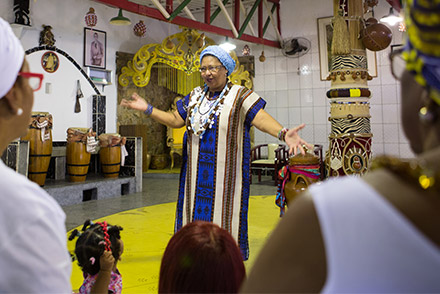 Through CRIOLA, Nilce learned about women’s human rights, and she has become a passionate advocate in her community, giving lectures to other women and teaching them what she’s learned about women’s rights and basic legal protections. She says sharing this information with other Afro-Brazilian women is critical, because there is a “huge lack of knowledge, particularly around women’s rights.”

To Nilce, women’s equality “means that when a woman arrives at a job, she can occupy the same space as a man or a white woman. She can enter through the same door, eat the same food, receives the same salary, because she is just as capable as the white woman or the man. Equal rights. It doesn’t matter if you are black or white, rights should be the same.”

Nilce is deeply connected to—and proud of—her community, and that is what motivates her to continue working to educate others about their rights. “I need to keep doing this, to tell people that we are capable—that we, black women of African roots, know how to make beautiful things. We take on huge projects and we accomplish them.”

28¢
That's how much black women in Brazil earn for every $1 a non-black man is paid.
The wage gap is enormous, and contributes to gender inequality. Global Fund for Women is working to change that. 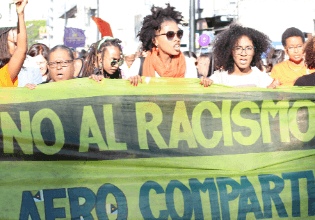 There is no gender justice without racial justice. Black Lives Matter across all borders. No exceptions.