Now that I make my own money, 600-700 rupees a day [roughly double Nepal’s minimum wage], I don’t have to rely on my family. I’ve also learned through this co-op organization how to earn, save, and invest back into my business.”

Send a message of support to women in Nepal

One year later, your words of solidarity matter. Write a message of support to show women survivors of the earthquake that you care and stand with them. Recognize their critical work and thank them for their courage.

Sun Laxmi lost her home in the earthquake and now meets with other women to help with trauma in a safe space set up by Global Fund for Women grantee Beyond Beijing Committee.

Sun Laxmi lost her home in the earthquake and now lives with nine family members in a public temple area in Thimi, Bhaktapur, which she finds extremely challenging because of the lack of privacy.

Her husband works as a plumber and earns 10,000 rupees per month [approximately USD $100], which is more than Nepal’s minimum wage of 8,000 rupees per month, but she remains worried about their income and expenses. They have two children and care for her brother’s four children too.

Beyond Beijing Committee has used Global Fund for Women crisis funding to set up a safe open space for women in Thimi, Bhaktapur—one of the remote ancient, historical cities in the Kathmandu Valley famous for its pottery and rich culture—who otherwise wouldn’t have a place to meet, share their stories, and support each other. About 80 women, including Sun Laxmi, meet there every day from 11am to 3pm, after their household chores are complete and before their children come home from school.

In this safe space, Sun Laxmi opens up, expressing her worries. Hearing other women’s stories and similar concerns helps her feel more confident. She also learns about health and hygiene. Her mind has become more peaceful, she explains, because she’s receiving help in figuring out how to move forward.

Beyond Beijing Committee’s safe space creates a sense of community, as well as a place for training, support, and advice. Recently, a tailor gave the women a training on how to make reusable cloth sanitary pads. The women hope that this new skill will not only help them personally but allow them to generate income by selling the sanitary pads at local markets.

Anju’s home was leveled in the earthquake, taking not only her shelter but her source of income as she ran her tailoring business there. Now she is rebuilding her business at a co-op working space run by Global Fund for Women grantee partner Tewa.

Anju Parajuli works as a tailor in the Kavre district. Before the earthquake, Anju ran her sewing business out of her home, after learning tailoring from Tewa, a local Global Fund for Women grantee. When her house was leveled in the earthquake, she lost her home and her source of income.

Anju now lives with her extended family and has begun working out of the Tewa co-op space. Her sewing business is starting to pick up again.

“Now that I make my own money, 600-700 rupees a day [roughly double Nepal’s minimum wage], I don’t have to rely on my family,” Anju says. “I’ve also learned through this co-op organization how to earn, save, and invest back into my business.”

The Kavre district, where Anju lives, is a devastated area that was hard-hit during the earthquake. Tewa is working there with a large group of women, including Anju, who are part of their co-op organization, which was set up with crisis funding from Global Fund for Women to help women meet their needs and discuss their challenges. Through the co-op, Tewa provides maternity kits and financial support through income-generating projects and trainings.

Sarnila and her one-month-old baby ran away to a shelter for survivors of domestic violence run with help from Global Fund for Women grantee partner Loom. When the earthquake hit just weeks later, they moved into a tent and received health and hygiene necessities from Loom.

Sarnila was once happily married with a nine-year-old son. Her husband worked in Sikkim and, one day while he was away at work, Sarnila was raped. At first, she didn’t tell anyone. When she was eight months pregnant, she tried to commit suicide by hanging herself. When her husband found out she kept this from him—just weeks before the earthquake—he was angry, took their son, and left her.

Desperate, she finally reported the situation to the police but, in Nepal, there is a 35-day statute of limitations; it was too late to prosecute. Instead, the police brought in the perpetrator of the rape and he offered to marry her. Feeling she had no other options, she went with him—only to discover that he was already married and she would be his second wife. The first wife was furious and began to beat her.

When her baby was one month old, Sarnila ran away to Dolakha and found a shelter, run with help from Global Fund for Women grantee partner Loom, that helps women who have escaped domestic violence. Only a couple of weeks after she arrived, the earthquake hit and damaged the shelter, so Sarnila and the other women are now staying in tents.

Sarnila came with nothing, so she is very grateful for everything she has received from Loom since arriving at the shelter. She received a new mother kit from Loom containing necessities and toiletries including baby massage oil, toothpaste, a gown, sanitary pads, newborn baby clothes, a baby shawl, milk, baby formula and baby bottles for those who need them, and lentils, rice, and beans. She also received a mosquito net to help ward off mosquitoes in the tent, as the threat of mosquito-borne illnesses increases following earthquakes.

For women like Sarnila, the earthquake layered new challenges on top of those that existed before like domestic and sexual violence, and increased the need for shelters and safe spaces for survivors escaping violence, as well as health care needs for new mothers and babies. Like all other Global Fund for Women grantee partners in Nepal, Loom recognizes that the unique needs and challenges women in Nepal were facing before the earthquake remain after. Importantly, they continue their critical work to help fill care gaps for new mothers and babies in places like shelters for survivors of domestic violence, adding unique earthquake relief-related materials to their kits to help meet new challenges.

This long-term support is critical for women like Sarnila who now has a healthy one-year-old baby, thanks to support and critical healthcare from Loom.

All stories as told to Alison Wright for Global Fund for Women. 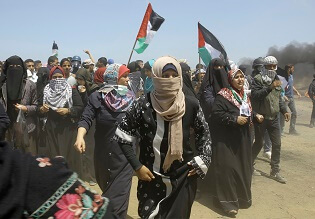 We stand in solidarity with Palestinians, and we condemn the shameful violence and repeated violation of human rights by Israeli forces.