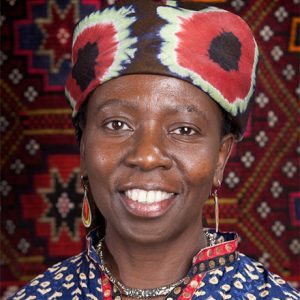 Dr. Musimbi Kanyoro was President and CEO of Global Fund for Women from 2011 to 2019. She is globally recognized for her leadership of organizations and initiatives that advance women’s and girls’ human rights, and philanthropy for communities. Musimbi is passionate about using philanthropy and technology to drive social change.

During her time at Global Fund for Women, Musimbi saw the organization surpass $140 million in grantmaking and spearheaded a successful merger with another non-profit. She expanded the organization’s influence through her participation in major international dialogues, frequent contributions to major media outlets, and speaking engagements in prominent global forums.

Before joining Global Fund for Women as CEO, Musimbi was Director for Population and Reproductive Health at David and Lucile Packard Foundation.

Musimbi was appointed general secretary (CEO) of the World YWCA in 1998, the first non-white woman to hold the role after 150 years of existence. During her tenure, she made the organization a go-to organization for young women’s leadership and for HIV prevention and care. She also transformed the World YWCA into a young-women-led organization, with young women under 30 making up 55% of the Global Board of Trustees. Based in Geneva, Musimbi also worked as the Executive Secretary for Women in Church and Society at the Lutheran World Federation for 10 years, where she influenced numerous policies including ensuring an equal 50% of women on governing boards and allocating no less than 40% of the Federation resources to causes that impact women’s lives.

Musimbi’s early work focused on the self-determination of African peoples and the abolition of apartheid in South Africa. She was a national student leader who quickly took leadership on a wider stage, serving on United Nations and other International and Ecumenical Youth Forums, including an early role as the National Executive Secretary for the United Nations Student Association.

A true global citizen, Dr. Kanyoro has worked and lived in Geneva, Nairobi, and in Cambridge, New York, Austin, and San Francisco. She has written and published extensively on matters affecting the lives of women and children, and has spoken at numerous forums including the UN General Assembly and TEDWomen (you can watch Musimbi’s TED Talk, released in March 2018, here). She received her bachelor’s degree from the University of Nairobi, Kenya, a Ph.D. in Linguistics from the University of Texas, Austin, and a doctorate in Feminist Theology from San Francisco Theological Seminary. She was a visiting scholar at Harvard University, and has received several recognitions and awards, including a leadership award from the Kenya Government, and recognition as one of the 21 women leaders for the 21st century by Women’s E-News. In 2015, Forbes magazine named her one of 10 women “power brands” and in 2016, she was named to the Forty Women to Watch Over 40 list for making an impact in philanthropy and gender equality. In 2018, Apolitical honored her on their list of the 100 most influential people in gender policy.

Musimbi serves on the UN Women Civil Society Advisory Board; the World Bank Gender Advisory Board; the Boards of CARE, Landesa, and Sheryl Sandberg’s OptionB.Org; Aspen Leaders Council; the Global Citizen and CHIME FOR CHANGE Girls’ and Women’s Committee; and the Reference Group of FP 2020, an initiative of the Gates Foundation, UKAID, USAID, and UNFPA, managed by UN Foundation. She is also a Champion for SheDecides.