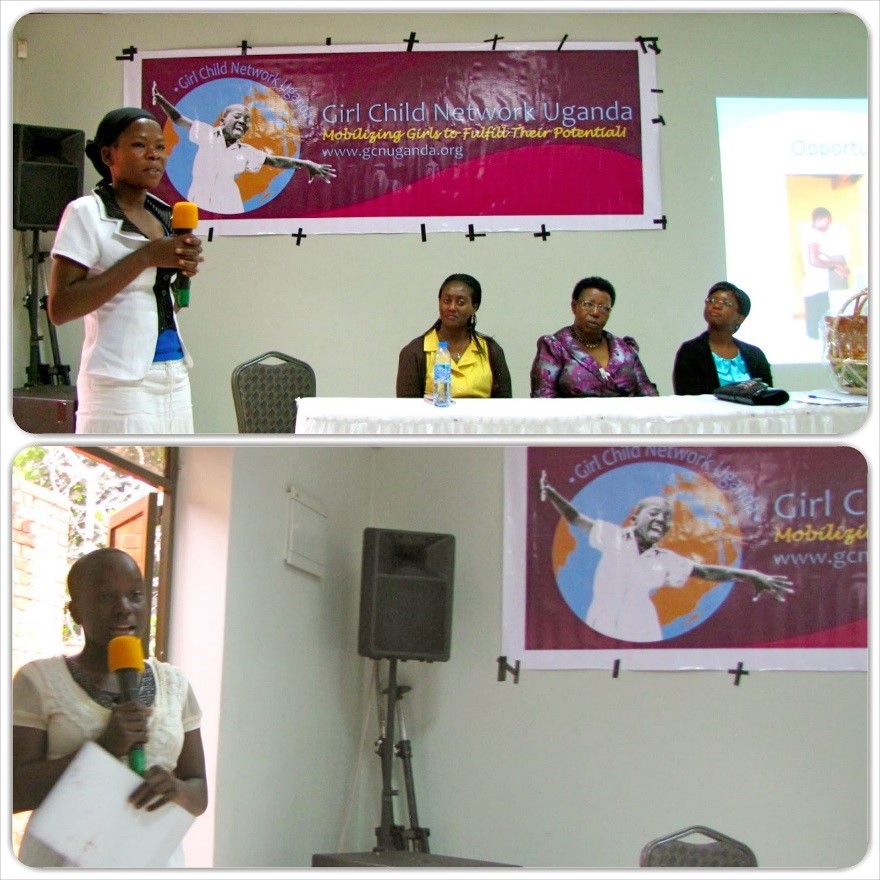 Florence speaking at a GCN event

Editor’s Note: Memory Bandera from Girl Child Network Uganda, a Global Fund for Women grantee partner, recently shared the story of Florence, one of the girls who participates in GCN’s programs. Florence’s work to strengthen the girl’s club she was part of and encourage other women to get involved is one example of how an individual can build a movement by getting her peers involved.

Girl Child Network Uganda received its first grant from Global Fund for Women in 2010, and used that money to establish girls empowerment clubs in schools and communities. Florence was one of the first members of one of those clubs, called the Acholi Quarters club, established in 2011. The club consists of girls and teenage mothers from northern Uganda, some of whom were affected by the Lord Resistance Army war.

Florence has grown significantly within a few a years, and Girl Child Network Uganda is very proud of her. Florence migrated to Kampala with little or no hope of achieving her dreams. But Florence displayed impressive leadership skills. She was chosen by her club to be the first president of Acholi Quarters, a role which she executed beyond our expectations. The grant from Global Fund for Women enabled us to provide therapy and leadership mentoring. In December 2013, we invited Florence and other members of her club to meet with some of Uganda’s most successful role models. Florence interacted with the former Minister of Ethics and well-renowned activist, Hon. Miria Matembe—an opportunity she had never dreamt of in her life.

Acholi Quarters club started a Village Savings and Loan Association (VSLA) in February 2012 with funding from Global fund for Women and two other donors. Through the VSLA, Florence made savings that enabled her to start a clothes business. Her business has since grown, and she now sells her clothes in main markets of Bweyogerere, Kiganda, and Banda. Her success story has inspired so many women in her community.

The most amazing achievement by Florence this year is her ability to re-mobilize the Acholi Quarters club to come back together and resume their VSLA. This club had begun to disperse because they were threatened with eviction from their meeting space. Florence mobilized the members, and Acholi Quarters club is up and running again under her leadership.

This year alone Florence started two VSLAs in Bweyogerere to help other women gain the same financial independence that she now has. Florence is a perfect case in point of the aims and objectives for which Girl Child Network Uganda was established and a testimony of what little funding can do for girls like her.