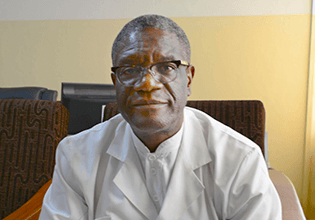 Global Fund for Women works alongside Dr. Mukwege in an alliance to end sexual violence.  We celebrate Dr. Mukwege and join him and activists around the world mobilizing resources and changing laws and social norms to cultivate a culture of zero tolerance for violence against women. The Nobel Peace Prize committee shines a critical light on survivors with this award. We echo and amplify their calls for the global community to take concrete action to prosecute perpetrators and end sexual violence.

“Dr. Denis Mukwege did not deserve this prize.  He earned it. It is with immense joy that we celebrate this award and send congratulations to Dr. Mukwege, Nadia Murad, and the selecting board of the prize,” said Global Fund for Women CEO Musimbi Kanyoro.

“For the many women for whom this medical doctor made a difference, this is only a fraction of acknowledgement, letting the world know that there are men and women willing to stand up for justice for women. Dr. Mukwege consistently uses his voice and international platform to speak with and for women suffering sexual abuse,” Musimbi Kanyoro said. “Global Fund for Women celebrates a well-earned Noble Prize to both recipients.”

We asked Muadi Mukenge, former Program Director for Sub-Saharan Africa at the Global Fund for Women from 2004-2016 (and currently Secretary at the Congolese Studies Association) to share more about what this prize means for the DRC, Global Fund for Women’s work, and the movement to end sexual violence as a weapon of war.

The Congolese Diaspora and those fighting for human rights in the Congo are immensely proud of Dr. Denis Mukwege as the co-recipient of the 2018 Nobel Peace Prize. What an honor! The world is seeing what we have known for almost two decades: His work is critical in the fight for human rights and dignity in the Democratic Republic of the Congo (DRC). The Nobel Committee recognized him for his work to end sexual violence as a weapon of war and armed conflict. Dr. Mukwege has always made this link between the rape and mutilation of women and the need for political change—not just in the Congo, but in the global community that supports the war. He has stated that the award is not for him, but for the survivors of sexual violence, who are finally being seen. The Nobel Peace Prize by extension is shared with the movements that advocate for respect of human rights in the DRC on a daily basis.

Global Fund for Women invested over $880,000 in women’s groups in DRC from 2004 to 2009, a four-fold increase since 1987. The effort was part of a special initiative to draw attention to the extreme violence exacted upon women, at a time when most donors were reticent to consider funding in the country. Our 2010 report was a call to donors to make funding to women’s rights initiatives in the DRC a priority, and to demonstrate that a lot could be done to improve lives despite the political context. Many of the groups we have funded refer patients to Panzi Hospital, which is run by Dr. Mukwege. For over a decade, Global Fund for Women advised donors on their funding to DRC, organized convenings for grantees, and undertook significant public speaking to elevate the issue of human rights abuses in the DRC and its link to the exploitation of DRC’s natural resources for critical global industries. In total, from 2004 to 2018, Global Fund invested nearly $3.5 million in women’s groups in the DRC. Grantee groups took survivors to Panzi Hospital for the life-saving surgeries offered by Dr. Mukwege and the doctors he has trained.

Dr. Mukwege created a foundation – Panzi Foundation – to further elevate the visibility of the movement for transformation in the DRC. I met him in 2015 when he spoke at UC Berkeley, and afterwards we had dinner with a small group of Congolese living in the Bay Area.

Dr. Mukwege’s voice is part of the constellation of voices that have been advocating for sustainable peace, democracy, and justice in the DRC. The Nobel Peace Prize caps decades of work by this movement. Dr. Mukwege does not do his work to gain recognition from award committees, and neither do the countless human rights organizations in the DRC and globally. Dr. Mukwege provides medical care despite threats of physical danger to himself, in the same vein as the women’s rights advocates who lead over 40 women’s rights organizations with whom Global Fund for Women has been honored to collaborate. As Dr. Mukwege said in his award speech, the push for transformation in the DRC must continue in order for the security of women to become a reality.