Skip to content
Bodies + Rights = Power
“You have to keep fighting”: Uruguayan Feminists Work to Build on their Gains

“You have to keep fighting”: Uruguayan Feminists Work to Build on their Gains

For women in many Latin American countries, the small nation of Uruguay might seem like the country that could. After years of organizing and education by a determined feminist movement and its allies, Uruguayan women have made important gains in sexual and reproductive health and rights, including a law passed in 2012 that provides for legal abortion in the first 12 weeks of pregnancy. Yet the feminist movement here knows well that any wins must be constantly defended, and progress only comes after tremendous effort.

Founded in 1996, Global Fund for Women grantee partner Mujer y Salud has been at the forefront of this movement, carefully devising a strategy of alliances that led to the victory. But one thing its members know is that sexual and reproductive rights aren’t just guaranteed on paper, and that laws—no matter how progressive they are—are a starting point, not an end, when it comes to assuring that all women can exercise control over their bodies and their lives.

Lilian Abracinskas, director of Mujer y Salud explains, “Often when you achieve changes and advances, you think you can rest on your laurels. But it’s not enough to have a law, it’s not the end of the road. A new phase begins: you have to fight for resources, for well-trained professionals, for quality services, inclusion, and universal access. You always have to keep fighting.”

The group has proved that through constant vigilance and grassroots mobilization, women can not only win sexual and reproductive rights, but keep them and improve them over time. 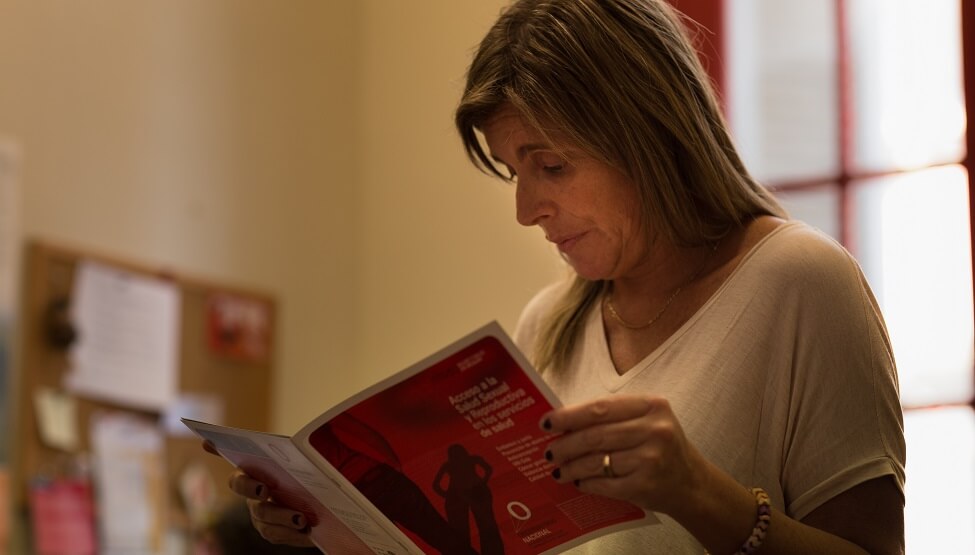 Mujer y Salud works in four areas: monitoring, communication, influencing policymakers, and training. One of its many projects was the creation of a Citizen Platform on Sexual and Reproductive Health that laid out civil society demands for the candidates before the 2014 elections. The five-year plan now holds the government to specific measures to maintain a political commitment to these rights and to improve services and access. “The idea is for this to be a tool to publicize the services available so people use them, and also to prevent any regressions,” says Abracinskas. The Platform demands that these rights be respected without discrimination; that the state provide funding, training, and conditions for full implementation; that health and education programs prioritize the pleasure dimension of sex; and that it provide inclusive services to attend to gender violence, among other points.

The group has helped build a strong citizens coalition in defense of sexual and reproductive rights. For example, the same coalition that developed the platform was forced to spring into action in 2013 when right-wing groups tried to repeal the abortion law. Their response succeeded beyond expectations: the anti-rights groups received only 9% of the vote—way below the 25% needed to begin the repeal process.

In 2007, Mujer y Salud began a watch group on gender and sexual and reproductive health to monitor birth control, birth and post-natal services, domestic and sexual violence, sexually transmitted disease, abortion, and services to teens to check how public policies and services are working. Along with research and monitoring, the group carries out regular surveys and research projects that provide important information for increasing the quality and coverage of public health services in the area.

It found that the services mandated by the law went into effect throughout the country quickly and efficiently in 2013. Since then, every year, more women have used legal abortion services. “We think this is extremely positive because it means that the stigma or distrust of the services is going down and more people will seek the legal services,” Abracinskas notes. That spells better care and makes a huge difference in how women feel about themselves and the experience.

The group also discovered some major challenges. The state does not publicize the services sufficiently, so there are still some places where women don’t know they have a safe, legal option. Since abortion outside the legal installations is still a crime, these women face criminal charges in addition to increased physical risks. Another problem is that some women, such as recent migrants, aren’t covered by the law. “There are leaks in the system that lead into the old clandestine ways,” Abracinskas observes. She cites a gap between about 10,000 legal abortions a year under the law and estimates of between 16,000 to 33,000 abortions yearly before, indicating that clandestine abortion continues.

Uruguay’s access to legal abortion also fails to completely decriminalize women’s choices. Although women have vital options (unlike in other societies in the region), there is also a threat of losing gains made so far in sexual health rights. Evangelical forces on the right have presented legislative proposals to declare personhood from conception and to promote maternity and encourage women to return to the home. The legislation, which reflects international campaigns and the “Trump effect” of emboldened anti-women forces, maintains that allowing women in the workforce erodes traditional values.

It’s a high-stakes battle. “For us, the issues of women’s bodies, their freedom, their autonomy is a big part of the struggle for women’s empowerment and emancipation in a patriarchal system. It’s very difficult to recognize yourself as a full citizen if you can’t make decisions about the most intimate parts of your life,” says Abracinskas.

For that same reason, resistance from the patriarchal system is powerful. Abracinskas points out that while there have been advances in other rights in the region, recognition of sexual and reproductive rights is too often stuck or moving backwards. They are the first rights sacrificed in political negotiations and even worse, in many places advances have generated a backlash that has led to increased violence against women and femicides.

“Sexual and reproductive rights are the fundamental terrain for the struggle for rights, because once we’ve attained them, it’s much easier to fight for economic autonomy, for educational autonomy, and labor rights and others.”

Photography by Serap Sabah for Global Fund for Women.

For us, the issues of women’s bodies, their freedom, their autonomy is a big part of the struggle for women’s empowerment and emancipation in a patriarchal system.
Lilian Abracinskas, Mujer y Salud en Uruguay