Now more than ever we need to elevate the diverse and vibrant art and voices of Muslim women from around the world to emphasize that Muslim people cannot be defined. Trump’s executive order banning immigrants from Syria and seven other predominantly Muslim countries, which also establishes a religious test for refugees from Muslim nations, has led to increased hate crimes, discriminatory language, and damaging stereotypes about Muslims. We cannot allow this hate to hold. We need to change the dialogue, and elevate Muslim voices and stories.

Muslim people are bold, creative, courageous, diverse, and dynamic. Muslim women are doctors, teachers, mothers, human rights activists, artists, journalists, dancers, and so much more. They are shattering stereotypes just by being themselves.

Global Fund for Women stands for women’s right to define themselves and their own narratives, free from stereotypes and hate.

Explore the powerful work and words from Muslim women artists, activists, photographers, and leaders through this selection of work originally featured in our Muslima: Muslim Women’s Art & Voices campaign.

Together, let’s get loud to shatter damaging stereotypes about Muslims in the United States and around the world. Use #MuslimaMeans to share your own thoughts, perspectives, art, and voices on what being a Muslim woman means today.

Let’s change the dialogue and #BuildMovementsNotWalls. 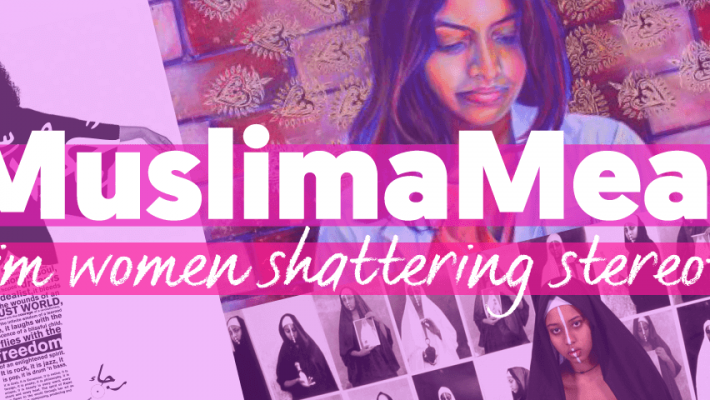 Humor and art can be powerful instruments to shatter stereotypes and end discrimination. In her illustrations, artist Soufeina Hamed is doing just that. She translates everyday issues in and out of the Muslima community into humorous and imaginative illustrations to show that Muslim women’s everyday issues aren’t that different from anyone else’s. In Less Different,…

Where are all the Muslim women in music and pop culture? Singer and artist Rajae el Mouhandiz is leading the movement for Muslim women’s representation in pop culture with her message of positivity, hope, and inclusion. Rajae shares her music video and talks about what challenges she faces as a Muslim woman artist, from both…

In her spoken word performance, Tasleem Jamila el-Hakim explores the complexity and intersectionality of a multinational, multicultural, multi-faith identity. In I AM, she talks about her ancestry, her faith, her beliefs, and her roots, and considers power and interfaith dialogues as a Muslim woman and so many other things. She embodies the diversity of Muslim…

Strong women come in many forms. Using religious imagery and iconic poses like Norman Rockwell’s “Rosie the Riveter”, artist Saba Chaudhry Barnard created a powerful series of portraits of American Muslim women. Through the portraits, the Pakistani-American artist celebrates the diversity, intersectionality, and strength of women, hoping to expand viewers’ understandings of Muslims and show a different power…