The Portal Series: Reflections on Feminist Leadership Through Crisis with M Adams

How have you led your organization, community, constituency, through this crisis?

M Adams, Co-Director of Freedom, Inc., Madison, Wisconsin: One of the things we did right away was to understand our work as central; we are frontline workers. We called hundreds of our people and asked them, “How are you? What’s going on? What can help you be well?” And we do our best to connect people to services.

We knew that women, girls, queer, trans, and intersex folks were going to be the hardest hit, and that “Safe at home” didn’t necessarily mean safer at home for our folks, so we experimented to create more access and avenues of safety. We created a Black and Southeast Asian teen hotline. Part of our strategy was to assert ourselves and our leadership in this moment and becoming a trusted site of information for our folks, so for example we also developed our own newspaper filled with up to date covid information, safety tips, and resources when we delivered food care packages

What have you done that is a departure?

For one—we didn’t yield our work, we never stopped. We didn’t take a break. We didn’t shut the door. In fact, we’ve busted another door through the wall and figured out a way to work for folks in other ways. We’ve also built coalitions in this time, we’re expanding to try to meet and move into what’s needed at this time.

Let me ask you about decision making from a leadership perspective. Was it more complicated or was it less complicated? Did you feel like you had to take on more of a leadership role than you ordinarily would have without the crisis?

When you think about how you get through this, are there things you think your organization wants to continue post-Pandemic?

The strengthening of the mutual aid work—this has really been an opportunity for us to engage with the recipients. We really want to strengthen our mutual aid organizing work with survivors. And we’re also trying to experiment. We’ve always done bail fund work, but we’ve never had as much money as we have now, so what that means is we’ve been able to get more people out than we have before, and that’s a different organizing space. And the backlash was hard. So you know us really having a strong politic around survivorship for women are feminism’s and we’re at a different place with the work, this moment has accelerated us and bumped us into a different category.

It sounds like you’re growing as a leader and that Freedom, Inc. is growing within the movement. What does that look like for you?

I’m taking a lot of risks. I have purposely put my name on other things that I’ve never done before. Someone told me that there’s not as much room as you think between mastery and stagnation. And so I’m really having to learn about other parts of me. The stakes are much higher, and I’m in a different position. I’m taking risks, I’m trying to listen a lot more, and I’m aiming to be bold enough to try. 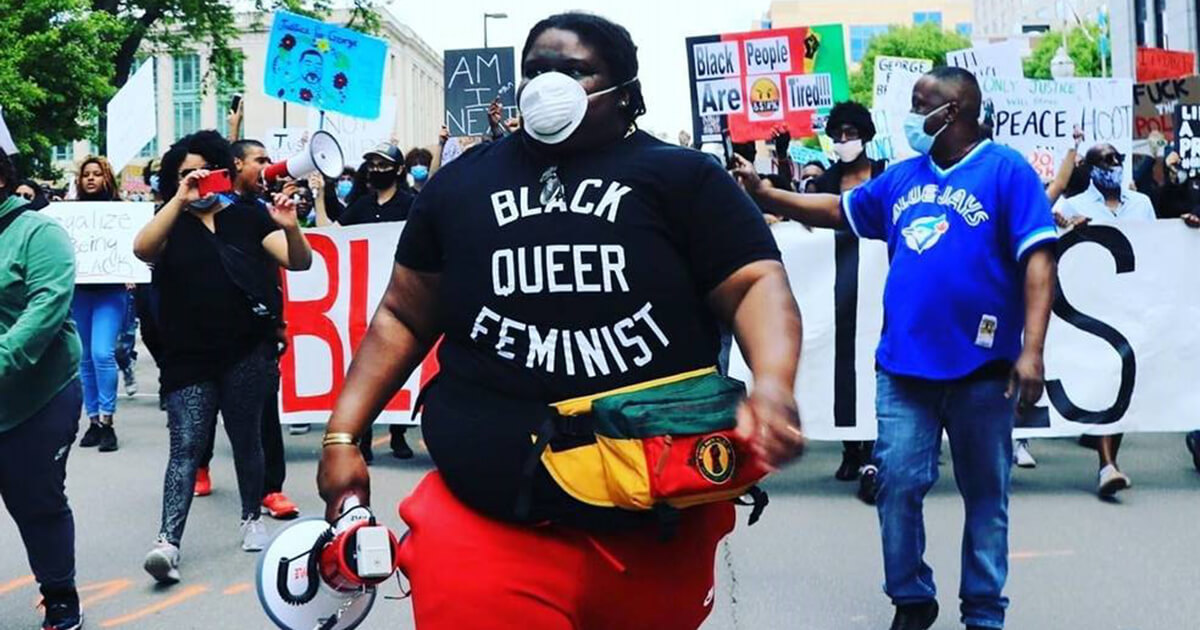 Adams is a community organizer and Co-Executive Director of Freedom Inc. Born and raised in Milwaukee 53206 to a single Black mother, Adams survived many forms of institutional and state-based violence and knows intimately the terror patriarchal violence causes inside relationships, homes, and families. Her father has been incarcerated for the majority of her life, and her community has been the extreme target of police violence. These experiences led Adams to develop a radical Black queer feminist abolitionist politic that disrupts the relationship between identity, power, and oppression.

As a queer Black gender non-conforming Dad, and a hubby, Adams is committed to building the world her family deserves. She draws from her lived experiences and applies movement science to lead grassroots campaigns that target violence and win real change in people’s lives. Adams has led several campaigns, including: taking over housing in order to implement the human right to housing for Black queer families with the Take Back the Land Movement; organizing with Southeast Asian elders to win community gardens; stopping the construction of a new jail; working to defund police; organizing community accountability responses to harm; and winning the removal of cops from Madison public schools.

Adams connects her local work with national and international movements and is a leading figure in the Movement 4 Black Lives. She has advocated her radical Black queer feminist abolitionist politic in numerous important venues, including before the United Nations–Convention on Eliminating Racial Discrimination;  in a co-authored Black Community Control Over the Police in Wisconsin Law Review Journal ;  and as author of important works of intersectionality theory, including an essay called, “Why Killing Unarmed Black Folks is a Queer issue.”

When not spending time with her kids, wife, and puppies, Adams can regularly be seen in person or in the media giving presentations, testifying at city council meetings, and energizing crowds at protests.