In Bangladesh, 85% of the 3.5 million people employed in the garment industry are women, many of whom face sexual violence and harassment at work. Global Fund for Women spoke with Maheen Sultan of Naripokkho, a Global Fund for Women grantee partner, about their efforts with garment workers in Bangladesh. Naripokkho is part of a coalition of organizations that is working together in factories across Bangladesh, building cohorts of women garment workers they call “Shojag Sathis” (“Friendship Companions”). In partnership with several garment factories, Naripokkho, through various training sessions, works with the Shojag Sathis in raising their awareness on human rights, violence against women, mechanisms for redress, and leadership strengthening. These Shojag Sathis in turn share this information with other women factory workers and provide support to workers affected by sexual violence or harassment, helping them access available legal, medical, or employment resources, and also offering social support. Mid-level managers of the factories are also trained to increase their knowledge of existing laws, human rights, and gender equality and action plans are being created to ensure effective mechanisms are in place to enable safe reporting and response to any instances of violence and harassment on the factory floor.  In this interview, Maheen shares more about the garment industry in Bangladesh, the issues facing garment workers, and what the biggest challenges—and opportunities—are for ending violence at work. 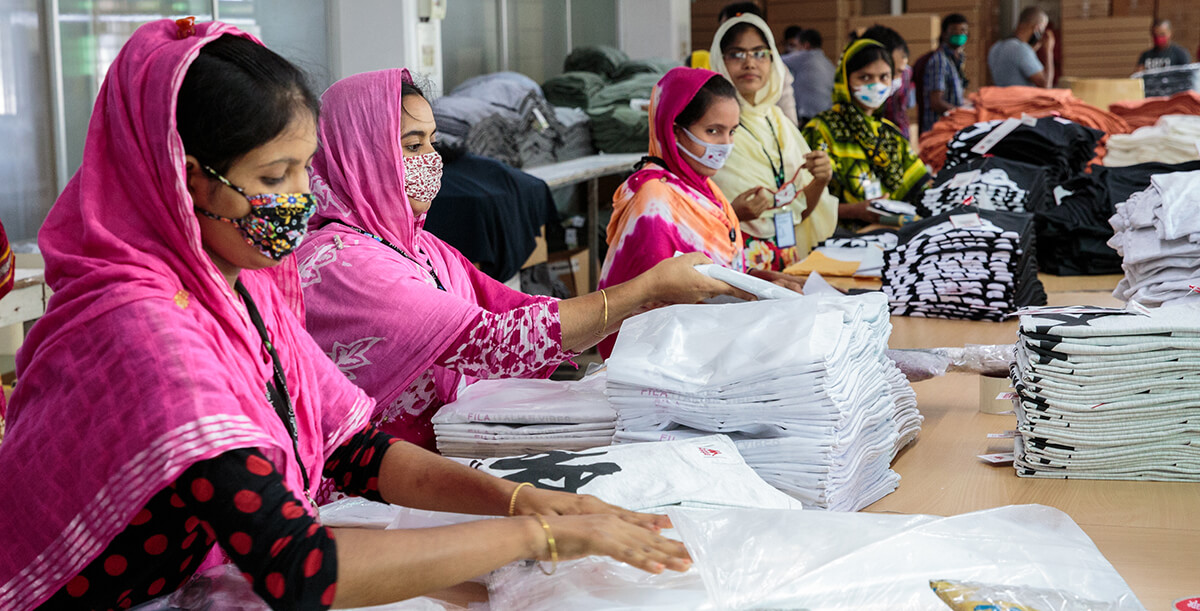 Naripokkho has been active in Bangladesh since 1983 and working for women’s rights broadly. Can you tell us why and how Naripokkho began working with the more specific group of women garment workers?

Maheen: We have been doing work with women garment workers ever since the Rana Plaza building collapse in 2013 [where a factory building in Dhaka collapsed, leading to the deaths of more than 1,100 workers and injuries of 2,500 others]. This is such an important area to establish women’s rights, with more women coming into the formal sector and with all the different kinds of rights violations taking place. We felt that women should have a platform where they can be heard as women and not just workers. And as a women’s organization, we’ve been working on issues of violence against women since our founding—[living free from violence] is one of the key areas for establishing women’s rights, and it’s a barrier for enjoying other rights. So working on issues of violence against women and women in the garment sector, that was very attractive to us.

Can you tell us about the garment industry in Bangladesh, and the women who work in that industry?

Maheen: There are about four million people working in the garment industry now in Bangladesh, both the formal and informal sector. Large factories, small factories, registered, unregistered—there are more than 3,000 factories in Bangladesh. There used to be a much larger female labor force; eighty-five percent of the workers were women. But now as the industry is becoming more professional, more mechanized, and wages are better, it means that more men are coming in as workers too. 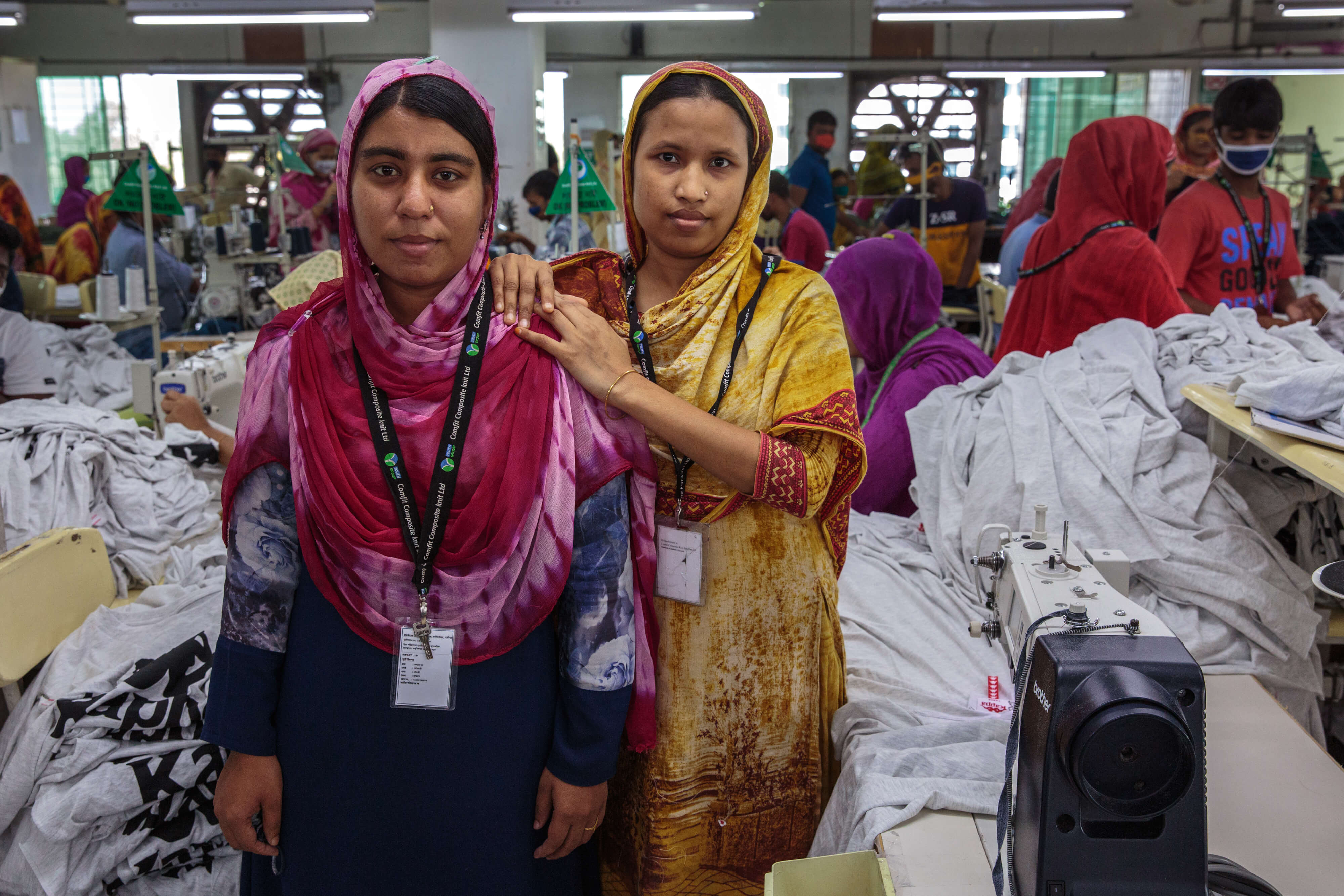 What is Naripokkho and the Shojag Coalition doing with women garment workers? What are some of the strategies to affect change?

Maheen: We are trying to raise awareness both among workers, factory management, and government of the extent of sexual harassment and violence against women that takes place in the workplace, in the commute to work, and in the places where they live. One of the issues is that the bigger factories think they’ve eradicated [sexual harassment] because there are hardly any formal complaints, and the small factories—the less compliant factories—they’d rather not talk about it.

We know that harassment and violence in the garment industry is common—in fact a recent survey of garment workers in Bangladesh done by the Shojag Coalition found that eighty percent of women workers faced verbal harassment and twenty-two percent experienced violence on the way to or at work. So why do you think there are so few formal complaints about sexual harassment?

There are several reasons—one, the stigmatization. For women who experience this, it’s quite shameful. This happens in all countries and in all environments—often you see people who have been molested or abused will sometimes feel that it’s their fault, they must have done something to provoke it, or they’re so ashamed of what happened they don’t want to talk about it. This is true here a well, and there is a lot of social stigma talking about sexuality or sexual advances. Often if they talk about their own case or complaint, then their family might blame them, or the husband might beat up the wife; “You must have done something to attract attention” or “It was your fault.”

Another issue is that women sometimes do not recognize violence or sexual harassment as such, or they might recognize it but they feel that it’s part of the work culture, that if you want to keep your job you have to put up with it. There is a fear that if you complain you might lose your job. So there are all these reasons why women do not want to talk about it. The male colleagues or supervisors are not even aware of what the women feel is harassment.

The difficulty in identifying sexual harassment is something women all over the world experience. Can you tell me what Naripokkho has been doing with women garment workers to be able to know their rights and more confidently identify harassment?

Maheen: Yes, with sexual harassment there is always this issue of “Am I imaging things?” “Was it really intended as harassment or not?” Sometimes you know what makes you feel uncomfortable, but you don’t know that you can complain. Garment workers experience harassment, and for a lot of them it results in stress and anxiety and not feeling comfortable about going to work, but they don’t know whether that man did it deliberately or if they’re misreading it.

Can you tell me some of the common kinds of harassment that you’ve heard about from women garment workers?

Maheen: It varies from a supervisor asking for sexual favors for you to keep your job or to have a promotion, to unwanted touch, to showing pornography on phones, or texting and calling outside of work. There’s a lot of stalking that happens outside the factory—women being followed, unwanted proposals, saying no and the men not taking no for an answer.

A lot of the women who come to the factories are migrant workers and not from the local area. They don’t have family here, they don’t have the social networks that they can get support from in case an incident occurs or if they receive a threat or an unwanted phone call or an unwanted proposal. They don’t know where to go for support, so they’re more vulnerable. That becomes a big problem because often the local governing bodies don’t pay [migrants] much attention, and migrant workers don’t often know who the local commissioner is who they should complain to.

You mentioned that Naripokkho began working with women garment workers after the Rana Plaza disaster in 2013. Can you say more about how that event changed the garment industry?

Maheen: Rana Plaza put the spotlight on the conditions of the garment industry. Even among large garment factories, there were few which were compliant, with very good working conditions, very good social provisions—but even those didn’t invest in infrastructure or systems. After Rana Plaza, not only were new compliance standards specified, but the government also provided financing to improve the safety of those factories. It compelled factories to make changes and redo the infrastructure to ensure greater security, safety, better ventilation, wider staircases—things that seemed pretty basic. And compliance became something that even ordinary workers would talk about. It meant having safety drills, having bathrooms, having water, having places to rest, places to eat, making sure the staircases are not blocked. It led to a basic understanding that there are regulations—around maternity leave, around leave, benefits, pay—that you should have contracts, you should have ID cards, and a professionalism among employees as well, an understanding among workers that “Nobody’s doing me a favor. I’m here, I’m a paid employee, I have certain rights. I have certain obligations.” Then, it also leads to a more professional relationship with the supervisors and the managers, and more confidence among employees.

Additionally, the garment manufacturers are very concerned about their reputation. That has both good sides and bad sides. One is that they want to preserve their reputation and have a good image in the international community. But that means that they are also hiding and denying things. They think that if there is a formal complaint in a complaint book, this means they’ve done something wrong. But as we’ve been trying to persuade them, if complaints come in, if you deal with complaints in a transparent and professional way, that means you are stronger as an organization and are making a healthy working environment. Not allowing complaints to come is denying the problem.

This story is part of our Working For Justice: Ending Violence in the Garment Industry series.