Sylvie Olson-Dorf and Claire Rafferty know that being a girl means you have the power to make a difference. And that’s exactly what they’re doing—fundraising for Global Fund for Women and getting their peers on board to join the movement for gender equality.

As part of the Tzedek Project at the Brandeis School in San Francisco, which requires seventh-grade students to research and advocate for a non-profit organization of their choice, Sylvie and Claire became champions for Global Fund for Women. Sylvie and Claire wrote an essay, created a poster board, and made a video in order to teach their classmates about the impact of investing in women-led organizations around the world. The project culminated with students voting on which non-profits would receive a $5,000 impact grant.

Thanks to Sylvie and Claire’s hard work, the two burgeoning philanthropists won one of the five impact grants from their school to raise a total of $5,360 for Global Fund for Women. And they’re only 12 years old.

At Global Fund for Women, we believe in the power of girls to change the world. While there’s still work to do before women and girls are truly equals, everywhere, with a generation of girls like Sylvie and Claire, and countless others around the world, we are more hopeful than ever for the future.

For International Day of the Girl, we spoke with Sylvie and Claire to learn more about what inspired them to take action to help us advance gender equality around the world and to get their advice for other girls to get involved too.

Before you created this awesome video about Global Fund for Women, did you know a lot about issues that affect girls around the world?

Sylvie: [I was] already interested in the subject of women’s rights because I dance in a feminist dance troupe!

Claire: I didn’t know very much about women’s rights but I was very interested in learning more and this project seemed like a great opportunity!

Did you learn something new or surprising? If so, can you tell us about it?

What was the hardest part of doing this project? How did you get people involved?

Sylvie and Claire: The hardest part of doing this project was convincing the boys that women’s rights is a real issue. Many boys aren’t taught about women’s rights, but after we did this presentation we think that we helped a lot of them understand the impact that issues such as abuse and violence have on lots of women around the world. We got people involved by telling them stories about women that we found on Global Fund for Women’s website that evoked a sense of how real these problems are. By doing this many of our classmates realized that they wanted to help too.

Why do you think it’s important to talk about rights for women and girls?

Sylvie and Claire: It is important because if people are educated about the problem, they are more likely to care and want to help.

What is one piece of advice you would give to someone else your age who is interested in supporting women and girls?

Sylvie and Claire: To get involved! If you’re old enough you can intern at a women’s rights organization, or you can volunteer! If you’re still too young for an internship, you can do some research on how to get your community involved and have a fundraiser like we did.

And lastly, in the spirit of International Day of the Girl, what would you say is the coolest thing about girls?

Sylvie and Claire: The coolest thing about girls is that we can create the next generation and have the girl power to change the world!!

Join us in celebrating some bright spots in a dark year: Our top 10 wins, highlights, and major breakthroughs for women's rights in 2016. 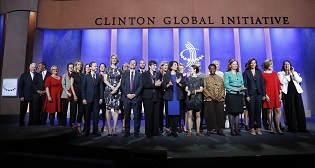 At the 2016 CGI Annual Meeting, Global Fund for Women announced its involvement as a coalition partner for commitments to action for girls and women.

From Michelle Obama to Amy Poehler to Oprah, there was no shortage of inspiration and empowerment at the United State of Women Summit this week.