Aurelia experienced first-hand the devastation climate change can bring when Hurricane Mitch hit her small village in Honduras in 1998. “Forty-two people died because of the hurricane,” says Aurelia. “I’ve always been a fighter in my community and after Hurricane Mitch, we were in a time of need. We had many problems with climate change that are still affecting us today.”

Motivated to do something, Aurelia became involved with Global Fund for Women grantee partner Organización Fraternal Negra Hondureña (OFRANEH) after a friend brought her to one of their meetings. OFRANEH works with the Garifuna people—descendants of West African, Central African, Island Carib, and Arawak people who live in Central America—to demand their social, economic, cultural, and territorial rights. Aurelia was interested in OFRANEH’s dedication to protect Garifuna land, and she began working with them to try to win land rights for the Garifuna in territories that are inland and more protected, and to change policies and laws to address the impact climate change was having on the Garifuna. “It was amazing to see so many Garifunas and so many people united in the fight for their land and community,” says Aurelia. 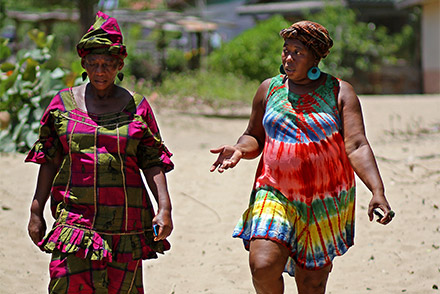 Aurelia soon became an even more passionate defender of the Garifuna land, especially because climate change has destroyed many of their natural resources. Garifuna traditions connect them deeply to the land, through agriculture, fishing, and farming. But because of climate change, all 46 Garifuna communities in Honduras (most of which are coastal) are at risk of disappearing. Through OFRANEH, Aurelia has learned more about the Garifuna women’s struggle, and how to fight for the Garifuna community and protect them from the “broken system” in Honduras. “OFRANEH has opened a pathway to so many things for me. Above all, it’s shown me the importance of defending our land, because it is everything to us,” she says. “Money comes and goes, but our soil and land will last a lifetime. OFRANEH taught me that.”

Aurelia says that Garifuna women are exceptionally strong, and are stepping up to help lead the community through the struggle for land rights. “When it comes to claiming your rights, the Garifuna woman is there. When there are meetings, the Garifuna woman steps up. When it comes to raising children, Garifuna women are there,” says Aurelia. Still, Aurelia says women in her community experience domestic violence, lack economic independence, and are “repressed because of machismo. Women should have their own rights–the right to freedom, and the right to do what she wants in her life because she can. She should have the right to choose her partner. Patriarchy and machismo need to be put to an end, and women should be themselves and act upon that, not according to the patriarchy and machismo that they have imposed on us.”

Women should have their own rights--the right to freedom, and the right to do what she wants in her life because she can. Patriarchy and machismo need to be put to an end.
Aurelia Martina Arzú