When Cynthia was 11 years old, she lost her mom to HIV/AIDS and went to live with her grandparents in the small village of Nandi, taking care of her brother and their household all while going to school. Even though Cynthia loved school and wanted to get an education, she had no one to look up to as a successful role model, and was often overburdened by chores at home. She says, “They would tell me to stay back at home and do housework because I am a girl and education doesn’t matter for me—being a mother matters for me.”

Despite her high ambitions, Cynthia struggled to balance housework and school and received a C-average, until she became involved with Global Fund for Women grantee partner Akili Dada. Through Akili Dada’s scholarship and leadership program, Cynthia rose to be a top student, finishing high school with an A-average. She also learned about women’s human rights through Akili Dada and is now a strong advocate for women’s equality. “If women understand their rights and work for them, then they will grow a society that has a different mindset about the sexes,” says Cynthia. “They will grow a society where the same value is placed on all genders. Whether you are a boy or a girl it doesn’t really matter—you are a human being.” 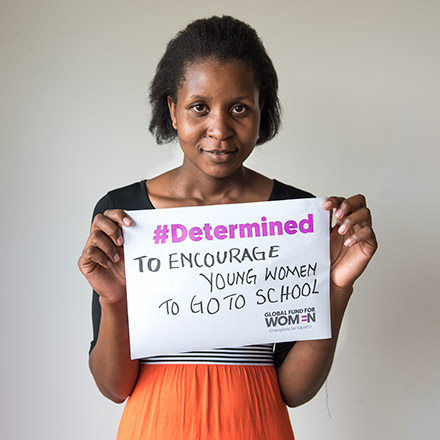 Cynthia fervently believes in the power and importance of empowering women and girls, and has created a youth program that brings role models from Nairobi to her hometown of Nandi so that that other kids in her community can see examples of positive role models and hear success stories that might inspire them to do well in school and pursue professional careers. Cynthia says, “I believe in stories, and I believe if I tell my story to one person I can empower someone through my story.”

Whether you are a boy or a girl it doesn’t really matter—you are a human being.
Cynthia Muhonja