Gloria grew up without her father, and her mother was handicapped and abused by Gloria’s paternal grandmother. As the oldest child, Gloria had to raise her younger siblings and has worked since she was seven years old, sometimes in abusive environments. When she was younger, Gloria dreamed of studying nursing, but she wasn’t able to go to school because she had to work and support her family.
Now, Gloria is a member of Global Fund for Women grantee partner the Asociación Civil de Comadronas Tradicionales de Chimaltenango (ACOTCHI), a group of midwives that offers health and professional training programs and teaches lessons about women’s human rights. Through ACOTCHI, Gloria has learned nursing and midwifery skills, and she now brings her knowledge to her family and community, who often come to her first when they aren’t well.

Gloria has also learned about women’s human rights through the group, including the right to be free from violence and the right to be paid equally to men—concepts that she didn’t know about before. “At ACOTCHI they often talk to us about human rights. I didn’t know about them. I didn’t know what a right was. But now I know,” says Gloria. “Even though in our municipality these rights are not are a priority, we have to start doing something about this. I would like to live in a world where ‘women’s rights’ are not only words written on a paper, but are actually a reality.” 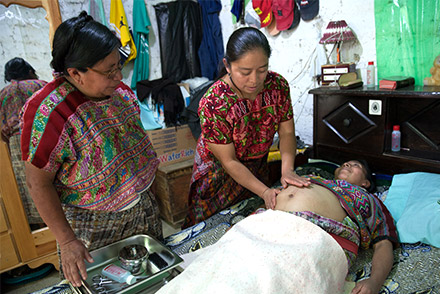 In Guatemala, many women deal with gender-based violence, and Gloria says that domestic abuse is often considered normal. Gloria is determined for this to change, and she encourages women in her community to report domestic violence and even meets with abusive husbands to teach them about women’s human rights. “Many people don’t talk about violence, about abuse. I also used to be ignorant of these things; I didn’t know what these were. For me, they were normal. For me, this is how life was supposed to be here. There were arguments, there were humiliating moments, and one says, that is normal for me. But it is not. And slowly one can see this better; that is how I have learned so much. Now if one is abused, if somebody treats us badly, one learns to say that is not ok.”

Gloria has become a passionate, outspoken, and brave advocate for women’s equality in her community, and says the lessons she’s learned through ACOTCHI have changed her life. “It is very important for me because it is like someone opened my eyes. That is how I think about it, and that’s how I imagine it,” she says. “It is like I was sleeping for a long time. And it is not like there were not good things behind that dream, but there are better things. Throughout my life experiences I saw many abuses and I suffered a lot. Today I don’t accept that anybody abuses me, or that somebody yells at me. I don’t allow it.”

Gloria is proud of the work she’s doing and hopes to continue to provide health services and raise awareness about women’s rights. Gloria says, “All this that I’m learning helps me a lot, because I live it and I practice it. Everything I do is helping me grow. Now I look for solutions and I am practicing what I’m learning. But that’s not all. I would also like to help other people and let others understand that women don’t have to be abused, and that women and men are equal. They have the same capabilities and we all are as valuable. There is so much machismo here, and people believe that only men are capable. I tell you, we women are capable!”

I would like to live in a world where ‘women’s rights’ are not only words written on a paper, but are actually a reality.
Gloria