Gözde is a 20-year-old journalism student at Ankara University and an activist for the rights of LGBT people in Turkey. When she was 16, she participated in an event organized by Kaos GL called “Women to Women,” where openly gay women come to share stories. She won a special award for her story-telling, and soon became more deeply involved in Kaos GL’s work raising awareness about LGBTQI issues and ending violence and discrimination against the LGBTQI community. She started writing stories on the Kaos GL website and managing the group’s social media.

In Turkey, gay people often face open discrimination and even violence, and there are no laws protecting LGBTQI people from discrimination. “I want to see our legal rights to be approved by the constitution…such as punishment for hate crimes. Everyone should be punished because of hate crimes.”
As a college student, despite the university’s restrictions and discriminatory practices, Gözde started an LGBTQI organization at her school called LeGeBIT, which organizes activities like coming out events, conferences about sexuality, and mental health workshops, as well as marches to convince the school to legally accept the organization and LGBT community. 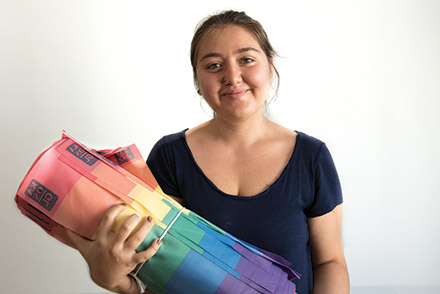 Gözde says her work with Kaos GL has helped her understand the value of collective action and movements as a way to become empowered and make lasting change. “I understand how a community that is organized really works, and I had a chance to understand what collective consciousness really means,” she says. “In every moment that we are trying to do activism, I feel powerful and safe. It’s like home to me.”

Gözde, who is bisexual, says that she is also especially invested in raising awareness about discrimination bisexual individuals experience, including from within the LGBTQI community. “My concerns and my thoughts about it has opened up other issues,” she says. “Other bisexuals like me have become more aware and have tried to create much more voice in terms of being bisexual and what that means.”

In every moment that we are trying to do activism, I feel powerful and safe. It’s like home to me.
Gözde Demirbilek