Maria Fernanda is the 16-year-old coordinator of Nací para Volar (“Born to Fly”), an outreach group for girls organized by Global Fund for Women grantee partner Asociación de Mujeres Constructoras de Condega (AMCC). Maria joined Naci para Volar when she was 12 years old. At the time, she didn’t know anything about feminism, and felt the weight of living in a culture where “machismo” is very powerful. She felt bullied at school as a girl, and didn’t feel respected by her step-father, and not always heard by her mother, who dictated what she wore and where she went, and wouldn’t allow her to play soccer because they thought it was inappropriate for girls.

In Nací para Volar, Maria and other young women were introduced to topics like sexual health, gender, and feminism—things Maria says “no one was talking about.” After learning more women’s rights, Maria says she began to recognize gender discrimination in her daily life and to see herself differently. She says joining Nací para Volar gave her the courage and knowledge about her human rights to speak up for herself—both at home and with her friends. “My self-confidence was elevated,” says Maria. “Now they can tell me anything, but I know that it is not true. I am who I am—whatever they say, I won’t let it bother me.” 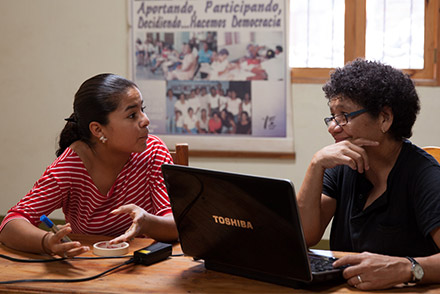 In 2015, Nací para Volar now includes 84 girls from urban and rural areas in Nicaragua. The group expanded its outreach to additional rural communities, where they noticed that girls as young as 13- and 14-years-old were getting pregnant. Maria says she knows how critical the knowledge Naci para Volar offers can be to a girls’ future. “Now, having a boyfriend isn’t a priority for me. Having someone to support me isn’t a priority for me,” says Maria. “I sometimes wonder how many kids I would have had by now, if I didn’t take these workshops. I would probably have had children by now.”

Maria currently studies civil engineering at the local university, a field dominated by men, which she says she chose very deliberately. “I studied civil engineering to break through stereotypes,” says Maria. “I want people to know that just because I am a woman doesn’t mean that I am less. I have the same capacity as a man to do things.”

I studied civil engineering to break through stereotypes. I want people to know that just because I am a woman doesn’t mean that I am less. I have the same capacity as a man to do things.
Maria Fernanda