When Perla started her first small business, she didn’t know anything about business planning or managing finances—she just knew she needed to earn money, because her husband had lost his job at a large steel company. With few options, Perla began to sell roasted peanuts based on a special recipe from her grandmother. Soon, she connected with Global Fund for Women grantee partner Unlad Kabayan Migrant Services Foundation. Unlad works to empower the Filipina women migrant population by providing funding and training for entrepreneurs. Unlad has kickstarted more than a thousand micro and small enterprises, creating more than 15,000 jobs.

Through Unlad, Perla learned how to grow and manage her own business. Her business thrived, and Perla’s income supported her family and allowed her to put her three children through school. Perla now shares her experience and lessons in being an entrepreneur with other women, through Unlad. Perla said becoming financially independent has improved her life drastically, and she wants the same for other women in her community. “If a woman has income, she can support her family and herself, and she can also help other women. For me, I can really help other women through my skills and my experiences,” says Perla, who firmly believes that economic empowerment is a fundamental human right. “To me, it is very important that women are economically dependent on themselves, not on their husbands. It is very important that she has her own means of deciding.” 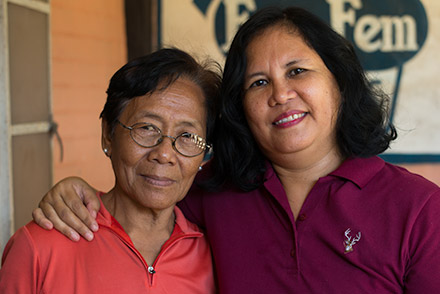 After starting as a beneficiary of Unlad in 2003, she now works for them as a finance officer. Perla also volunteered with Unlad during their relief efforts after Typhoon Bopha in 2012 and Typhoon Haiyan in 2013. During this volunteer work, Perla said she felt deeply connected to the women who were affected by the typhoon, many of whom worked as coconut farmers, and lost their livelihoods due to the destruction of coconut trees. She came to feel even more strongly about how important it is for women to have job skills and be financially independent, so that they don’t need to rely on their husbands for income during difficult times. “I saw women victims in Haiyan, [and saw] that they are trying to bounce back to their lives. That’s the time I felt I am a strong woman, because I was helping them.”

If a woman has income, she can support her family and herself, and she can also help other women. For me, I can really help other women through my skills and my experiences.
Perla Almaden