Rkia is a Soulaliyate, a tribal group that has a stake in in Morocco’s commons or “collective lands.” Traditionally, Soulaliyate women aren’t eligible to use tribal land; land passes only from father to son. As a result, many Soulaliyate women have been forced off their land, with some Soulaliyate men selling tribal lands to outside developers, leaving women without any recourse or compensation, and often without a home.

Rkia has eight brothers, and was passed over for land use rights. She said she began to fight against this discrimination when she started to understand that excluding women from land ownership was “injustice, and simply against common sense, logic, and human rights.” For several years, Rkia struggled on her own to change tribal laws and win compensation for Soulaliyate women, with no success—until she learned about Global Fund for Women grantee partner Democratic Association of Moroccan Women (ADFM) in 2007.

ADFM supported Rkia’s cause from the beginning. “They did not tell me, as others had, that the case is complicated, or that it is not within their jurisdiction, or give me some other excuse to avoid me. Just the fact that they were willing to listen to me reassured me, as I was one who was sailing alone!” says Rkia. “Even from that first contact with ADFM, I gained confidence and was sure deep inside that despite the difficulty of the situation and the strength of those who have an interest in keeping the status quo, we could persevere and succeed together—in our fight against the exclusion and injustice of women.” 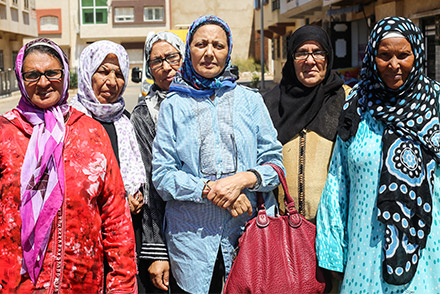 With ADFM’s help, Rkia spearheaded the Soulaliyate Women’s Movement, a public demonstration that quickly gained traction in her community and led to protests in the street, where thousands called for greater democracy, both in land rights for women and more broadly. The movement has had some important wins, including the right for women to benefit equally with men from the sale of collective lands and the right for married women to receive a share of collective land for farming. Women are also allowed to act as representatives in community assemblies—a right they did not have before. However, there is still work to be done. As Rkia says, “We are still fighting for the development of a new law on collective lands that will provide total equality between men and women.”

Rkia has spent years of her life on this cause because she believes winning land rights for Soulaliyate women could change everything—from empowering women economically, to shifting gender dynamics entirely. “The right to land, the right to the fruits from the rental or sale of collective lands—having these rights undoubtedly could change the lives of women who are in precarious situation[s] financially. For me, the recognition of women’s rights is first and foremost a recognition of the woman as a human being who should benefit from the same rights as men, without any discrimination.”

The recognition of women’s rights is first and foremost a recognition of the woman as a human being who should benefit from the same rights as men, without any discrimination.
Rkia Bellot