Swastika came out as a transgender woman about five years ago. She says that at the time, she had little support from her family, and knew nothing about LGB and trans rights. “When I came out, my father didn’t accept me and I had to go live on my own,” says Swastika. Then, she joined Global Fund for Women grantee partner Mitini Nepal, an LGBTQI support and advocacy group. “At that time Mitini Nepal was there and they helped me with transitioning and taught me about the LGBT community,” she says.

When Swastika was in school, she said she was often teased and didn’t do well because “it wasn’t a good situation.” She was unable to go to college, so with little education, no support from her family, and no job prospects, Swastika became a sex worker. Since becoming involved with Mitini Nepal, Swastika quit sex work and learned about the LGBTQI community, women’s rights, and human rights. She began to understand her gender identity and even began to open up about being transgender to the people around her. She says of this change, “I used to think that I couldn’t wear what I wanted to wear, that I shouldn’t lead the life I’m leading right now. I was afraid of being harassed by people around me. I don’t fear anything anymore.” 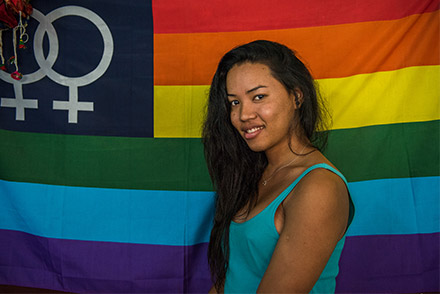 While there are laws protecting the rights of LGBTQI people in Nepal, they are not often enforced, and Swastika says she encounters abuse every day. “Being a trans woman, you have to deal with people in public who bully you everywhere,” she says. “If you go shopping, if you go anywhere in public, you have to face verbal abuse each and every day.”

While her biggest goal is to achieve rights for women and LGBTQI people, she says that ultimately, she wants all people to be treated with dignity, and for everyone to have freedom and choice regardless of their identity. “I don’t want anyone to judge just because of my sexual orientation or gender identity,” says Swastika. “I want people to judge me based on my work and my qualifications.”

I used to think that I couldn’t wear what I wanted to wear, that I shouldn’t lead the life I’m leading right now. I was afraid of being harassed by people around me. I don’t fear anything anymore.
Swastika TamaNg