When Yeri Sali was 16 years old, her father died, and she was taken out of school and forced into an arranged marriage. She soon had three children. When her first husband died, Yeri was forced to marry his brother, a common practice in her village. “I was so unhappy,” she says. Then, Yeri went to an awareness-raising event held by Global Fund for Women grantee partner Association for the Advancement of Women in Gaoua (APFG), where Yeri was taught about women’s human rights. “I finally realized I could wake up and do something,” she says. “I was able to gather up the money to repay the sum of my dowry, and become free. My courage to do this – in fact, the knowledge that it was even possible – was due to the education, awareness, and legal help I received from APFG. It was upheld. I repaid the dowry and was free.” 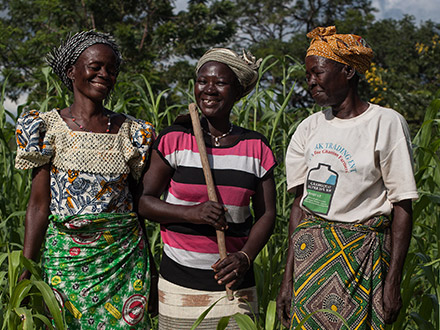 When Yeri was young, harmful traditions were common. “When I grew up, most girls were given away in forced marriage by their parents, and infant girls circumcised—what we now know is female genital mutilation, or FGM,” says Yeri, who is passionate about raising awareness around FGM, and has led a successful campaign to end it in her community. “It’s a huge health issue for women, both physically and emotionally. It hits the core of their self-worth, is a disempowering practice, and it needs to stop.” She feels that these harmful traditions denied her of essential human rights to choose who she wanted to marry and have control over her own body, and caused her to miss her youth and her happiness – something she wants to change for the next generation of women. For Yeri, women’s rights means that every woman “can make decisions on her own, that she is a human. Women’s rights are human rights.”

Since beginning her involvement with APFG, Yeri has become a bold force for empowering herself and other women in order to drive social change: Yeri learned to read and write and taught other women in her village as well; she studied solar energy in India and brought solar power back to her village; she taught women about agriculture for food security; and she has led awareness campaigns to help end FGM and arranged marriage. After many years of campaigning, Yeri says there are now no longer any female circumcisions or forced marriages in areas where she works. “My life has changed a lot since my involvement with the APFG. I am enlightened and I am respected in my village community. I think I’ve been able to get the village enthusiastic about women’s empowerment,” she says. “I want to awaken knowledge and awareness, just like I was awakened. Children need education and information to be able to grow into adults who can have economic security. Girls especially.”

I want to awaken knowledge and awareness, just like I was awakened.
Yeri Sali Youl