As a child growing up in Afghanistan, Dr. Sakena Yacoobi, the founder of Afghan Institute of Learning [AIL], witnessed daily instances of women suffering abuse, violence, and maternal health issues. “Every day, I saw a woman’s or a child’s body taken to the graveyard,” says Sakena. “My own mother had 16 pregnancies, and just five of us survived. Every [pregnancy], I was worried that I would lose my mother.”

From then on, she had one goal in mind: to help the women of Afghanistan. And while she began her journey alone, Global Fund for Women soon joined her as one of the very first supporters of her visionary work to bring education and opportunity to women in her country.

Sakena attended university in the United States, earning BA and MPH degrees, and eventually returned to Pakistan (since Afghanistan was fighting the Soviet Union) to pursue her dream. She began in Pakistani refugee camps in 1992, where she saw that hundreds of young Afghanis had no opportunity to go to school.

“I saw young women sitting and doing nothing. I kept asking myself, what can I do? I thought, look at my life—my life has been transformed. Education brings me so much power and confidence,” says Sakena. “So in that moment I decided, I’m going after education.”

Sakena began teacher trainings in the camps and soon opened schools for refugees. In 1995 she founded the Afghan Institute of Learning—funded initially only by Sakena herself. Soon afterward, Sakena learned about Global Fund for Women and applied for a grant.

Global Fund for Women became one of her first major international supporters at a time when she says it was “just me in a little room in Pakistan.” Global Fund for Women agreed with Sakena about the critical need for education for women and girls in the region and recognized her unique expertise, vision, and relationships.

“I believe in communicating with people. When I was trying to start my teacher trainings, I would sit for hours and hours in the camps and have a cup of tea and just talk, even with men or elders of the family about what’s going on and what happened to Afghanistan,” says Sakena. “They really poured their heart out to me and started trusting me, and I soon had their help in starting the schools and the teacher trainings.”

Sakena says that Global Fund for Women’s first grant—and continued support—was critical to her organization’s growth. “It gave me self‑confidence that I had somebody give something to me. It’s not just me; somebody else believes in this work of empowering women and getting women educated. That was really the beginning, because [Global Fund for Women] was one of the first organizations that helped me.”

Since then, Sakena and Afghan Institute of Learning have gone on to make incredible gains for girls’ education in Afghanistan, and Sakena has received international recognition and acclaim. While supporting education and health programs in the refugee camps, AIL began supporting secret schools for girls while the country was under Taliban control.

“When the Taliban were inside Afghanistan, people requested schools from me. I said, ‘How can I do that? It’s so dangerous.’ The system was so barbaric that right and left they were killing people, and they were not allowing women out of their house and definitely not to go to school,” says Sakena. But she soon had so many requests from Afghans that she decided to try, with the help of partners in Afghanistan who found safe locations for the schools in homes. 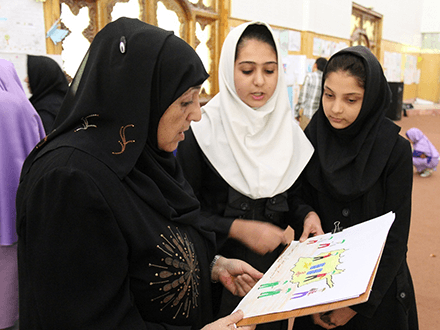 Through Sakena and Afghan Institute of Learning’s work, 80 schools were set up, educating over 3,000 students.

After the fall of the Taliban in 2002, AIL began operating openly in Afghanistan. Afghan Institute of Learning’s programs still focus on teacher training and education, but they also offer health training, legal aid, and operate 43 women’s learning centers, where women learn about political participation, healthcare, and more.

Global Fund for Women’s more recent support has allowed Dr. Yacoobi and AIL to launch a radio station that will broadcast educational programs about basic health care and women’s human rights, as well as to train almost 1,500 teachers annually and continue support for learning centers.

The organization’s programs now reach about 400,000 people a year. More than 70% of the beneficiaries are women and girls.

What is the importance of an organization like Global Fund for Women?
I really think that this organization is the most important organization in the world. Always, this has been my message, and it’s going to be my message. They don’t look at how big you are and how important you are and how famous you are. They treat you as a human being. You don’t feel small in front of them, in front of their staff. [Their staff] are the kind of people that really value you. This kind of attitude, it really helps.