Skip to content
The Future Is Ours: Young Women Leaders
Meet Bishnu: Fighting for Property Rights in Nepal

“When I was in seventh grade, my mom took my sister and me to a rally because we were conflict-affected and our demands and our needs were not being met. Some women stood in the front shouting the slogans and we were repeating after them. The police came and took us in their van to the police station, where they held us for two hours. I was very shy and it was my first experience at a rally…

I thought that was what a movement was—I thought there had to be a crowd of people, and they have to shout and they have to attract the attention of the police and the government. But after my trainings and what I’ve learned now through the Young Women’s Leadership Initiative, my understanding of movements and movement-building has changed. I know now a movement can start in a small room even, and it doesn’t have to be with a big crowd of people. Now I think a movement can start with just one or two people.”

From a young age growing up in Nepal, Bishnu Maya Gharti was interested in women’s rights and gender discrimination, because she saw women and girls in her community and in her school being treated differently. But it wasn’t until her mother took her to a rally focused on raising her community’s demands for the peace resolution and a transitional justice process that she decided she wanted to know more about how she could be part of movement-building for women’s rights.

It was in 2007 that Bishnu attended that rally; Nepal’s decade-long civil war between government forces and insurgent Maoist forces, in which some 13,000 people were killed, had just ended one year prior. The country’s transitional justice process has been a long and complex one. The 2015 constitution took critical steps to enshrine equality and women’s and girls’ rights in to law, yet it will take time for meaningful social change.

And that is where women’s movements and women leaders like Bishnu come in. 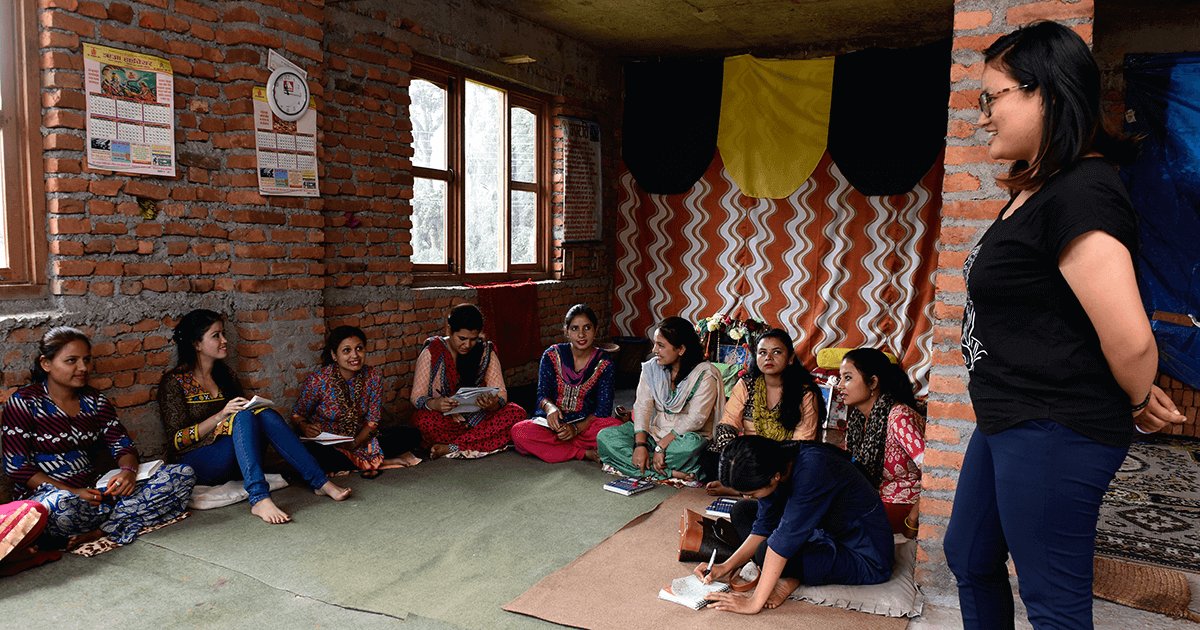 Working with women to demand equal property rights, starting with her own

Bishnu—now a confident 25-year-old—is  part of the Young Women’s Leadership Initiative that she joined through longtime Global Fund for Women grantee partner Nagarik Aawaz. All the young women leaders participating in the initiative were asked to create a project in their community that would address a problem facing young women and girls. Together with the young women in Jharuwarasi (a semi-urban area in the Kathmandu Valley), Bishnu designed and implemented a community project centered on economic rights. They launched a project to focus on improving their participation in decision-making and their ability to control resources, including access to bank accounts and family property.

According to UN data, only 20% of women in Nepal have some form of legal ownership over land, as cultural norms dictate that families pass land ownership down only to males. Only 11% of women are reported to have effective control over property. With around 75% of women engaged in agriculture as their main occupation, this is a massive disconnect.

Bishnu shared her own story:

“My family is composed of my mother and three sisters, including me, and one brother—our brother is the youngest one. And in Nepal it is believed that only the son can inherit property from ancestors. I wasn’t myself confident leading the project because I wasn’t sure that my mother would provide me property or not.

I didn’t want to start this project without being sure that I am going to get equal access to my ancestor’s property. I felt, I cannot teach others when I’m not sure that I’m going to be getting property or not myself. So I talked with my mother. It was very hard because though she is a single woman and a powerful woman, she is conservative. I had to give her many examples because she has some women friends who have gotten property from their parents as well. So I gave her those examples and showed her that because they have access to property, they have become independent and it has made their lives easier. After long rounds of conversations, my mother has promised that she will give me property.”

Equipped with this promise of property rights from her mother, Bishnu is more confident in her work with the women in her project. Now, Bishnu is working to build trust with them, which she believes is critical, along with designing solutions together. “I will take time to become friends with the women in the community, to listen to them, and share my views and experiences with them.”

With this in mind, Bishnu meets with the young women in the Jharuwarasi community project two to three times a month, and she brings her creativity into the program design to make sessions more enjoyable and collaborative. She speaks of the power and importance of bringing together women of different ages and backgrounds, with varied movement experiences, and at different points in their feminist journey, to share and grow together. Bishnu says the other young women leaders in the initiative inspire her: “They have already encouraged me, they have so much courage.”

When asked about her dreams for the future, Bishnu talks excitedly about dismantling Nepal’s patriarchal society starting with her own family. “Since I’m married now, I will definitely plan to raise my kids in a non-patriarchal way. I’ll try to raise them to be feminists. I will try to give them the lessons I have learned from working with Nagarik Aawaz.”