Skip to content
The Future Is Ours: Young Women Leaders
Meet Manika: Working to End the Stigma Around Menstruation in Kathmandu’s Slums

Meet Manika: Working to End the Stigma Around Menstruation in Kathmandu’s Slums

“When we started to discuss the issues in the communities, we all agreed we need to talk about menstruation. Our parents said, ‘we don’t touch these things—menstruation or periods; we don’t go there.’ They stop us from bringing it up. So we realized we have to work on that issue.”

As a girl growing up in a slum in Kathmandu, Nepal, Manika noticed early that women and girls were discriminated against in their families and in the community. When she was a teenager, Manika joined an adolescent girls’ club in her community run by Global Fund for Women grantee partner Nepal Mahila Ekata Samaj (also called “NMES”). NMES runs clubs within slums in Kathmandu to educate girls and women about issues that are shrouded in cultural taboos, like menstruation, hygiene, sexual and reproductive health and rights, and early and forced marriage.

Now, as a staff member of NMES, Manika is running her own project and growing her leadership as part of the Young Women’s Leadership Initiative. Working with the adolescent girls’ clubs—the same ones in which she was once a participant— Manika is leading a group of 22 adolescent girls in normalizing menstrual hygiene conversations and working hard to break the taboo around periods once and for all.

In Nepal, a traditional practice called chhaupadi has been in place for hundreds of years, rooted in the belief that menstrual blood is impure. While menstruating, women and adolescent girls and women are considered untouchable. Chhaupadi is practiced in varying degrees across the country and dependent on tradition and religion within communities. In 2017, Nepal’s government took action to ban the practice after three girls died due to chhaupadi in just ten months. In agrarian communities in far-west Nepal, where the strictest forms of chhaupadi are practiced, many women and girls are relegated to so-called “menstruation huts” or sheds that families specifically build for any female in the family to stay in while she is on her period. This societal norm of young women being “untouchable” for one week every month further perpetuates deeply entrenched inequality and discrimination against women and girls. It also means that many girls grow up fearing their periods and lack access to education or resources around standard hygiene or sanitation. 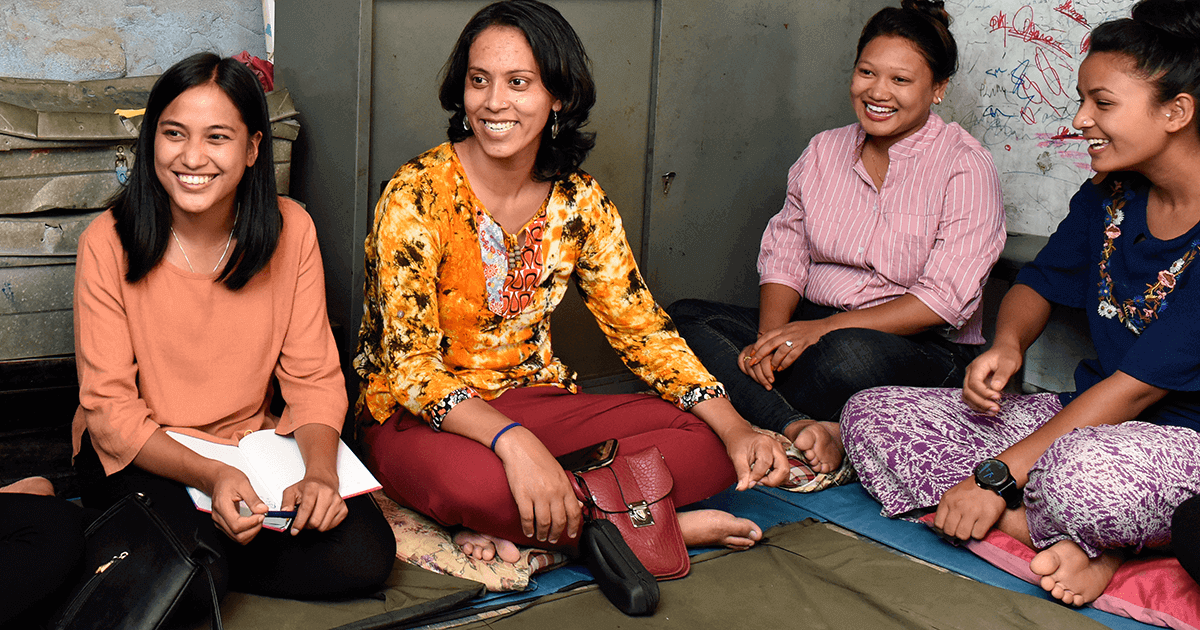 For Manika and NMES, raising awareness about gender discrimination associated with the menstruation stigma begins with adolescent girls, educating them and giving them the leadership skills to be powerful advocates for change in their own homes and communities.

To drive change, Manika and the 22 teenage girls she’s working with are tackling this issue at various levels within the community—educating and raising awareness among girls and young women, counseling parents, working with boys and men to break the stigma, and talking with religious elders. One of the teenage girls Manika works with shared, “because of us, our parents are learning also.”

Through the Young Women’s Leadership Initiative, Manika has learned to own her leadership. She has learned to use her voice to mobilize others around ideas and to inspire them to take action to work toward social change, and she is more comfortable designing and leading projects within communities. “I have more confidence now,” says Manika.

Bhagavati Adhikari, the Executive Director of NMES, has noticed a change in Manika since she started the Young Women’s Leadership Initiative, as well: “She used to share her feelings but said very little in the meetings and seminars. Now what I find is she can share her opinions in the seminars, even in the meetings. And she’s been more creative and interactive…and more strategic.”

This noted change in her leadership and abilities even led to Bhagavati and the team at NMES to promote Manika in her role, and she has become a leader in guiding other social mobilizers at the organization.

Bhagavati “loves” the intergenerational leadership model because, she says, she’s learning together with Manika and the adolescent girls just as much as they’re learning from her and the team at NMES. “I get knowledge from her also. She has really good ideas on the programs and processes in the community—so I learn from her and hopefully she learns from me,” explains Bhagavati. “So in that way, sharing and learning is happening in the mentorship programs.”

“My dream is for the adolescent girls and young women leaders in these communities to be free and self-made people; to be independent,” shares Manika. “I want girls to be able to do anything they want.”

My dream is for the adolescent girls and young women leaders in these communities to be free and self-made people; to be independent. I want girls to be able to do anything they want.”
Manika Shrestha