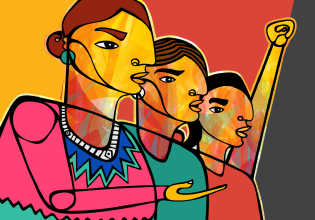 January 2018 marks a critical moment, and as we look back on the past year since the U.S. Inauguration and the historic Women’s Marches around the world, we’ve seen the power of women and the power of cross-movement organizing. We’ve seen the incredible creativity of unapologetic advocates for justice working for a better world for all. Now, we are more focused, driven, and excited than ever to make the biggest difference for women and girls in the year ahead. How? Here is our roadmap for women’s rights in 2018.

November 9, 2016:  The hotly contested U.S. presidential election has been called and Donald J. Trump is the new President-elect of the United States.

Trump presented a damaging and misogynistic view of the world during his campaign, and we must ensure that this does not carry into his policies, rhetoric, or actions as President. His language about sexual harassment, Muslim Americans, or immigrants, refugees, and other marginalized communities must not stand.

All of us must now work harder than ever to assert women’s rights in the U.S. and globally, or risk worldwide rollbacks in gender equality.

Now that Donald Trump has been elected President, what could it mean for women and girls around the world?

“Donald Trump’s degrading of women and people of different backgrounds cannot be brought into the office of the President of the United States, and we hope that the rhetoric he carried forward through the election ends now,” said Musimbi Kanyoro, President and CEO of Global Fund for Women. “As a global champion for gender equality, Global Fund for Women firmly stands for zero violence, for reproductive health and rights, and for equality of economic and political opportunity. Now is the time for the Trump administration to put damaging rhetoric aside, and prove by its actions that it will stand firm for the dignity of women, not just in the U.S. but all over the world.”

Global Fund for Women will be watching the new President-elect and administration with hope and expectation. We would like to see strengthened domestic policies on issues such as ending campus sexual assault, as well as a strong stance on women’s rights around the world. Just one example—the newly-adopted Global Strategy on Adolescent Girls, which carries great potential for girls around the world if fully funded and implemented. We hope that women’s access to reproductive rights is no longer disputed but improved, that equal pay for equal work becomes a reality for even the most marginalized women, and that the Helms Amendment, blocking U.S. foreign aid from helping women to access abortions even in cases of war-time rape, is finally repealed.

We hope that gender discrimination and everyday sexism is called out for what it is, every single time. And that we all do something to end it.

We hope that more girls and women globally are empowered to become leaders in their own communities and run for political office, so that we can move the needle on closing the global gender gap in political participation. Most of all, we hope that the U.S. and the world gets closer to realizing gender equality—rather than reversing critical gains for women’s human rights.

Together, let’s get loud to ensure that history is not reversed and women’s voices are not silenced.